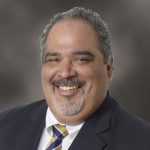 Personal Information
Roberto Rodriguez is a veteran educator whose upbringing was truly bi-cultural. He grew up and went to school both in Imperial Beach and Tijuana. He has been a Social Science teacher in the Sweetwater Union High School District since 1987, teaching mostly AP Government and Economics. His commitment to public education has led him to local and statewide advocacy work. Roberto has made Vista his home for the last 15 years with his partner Dr. Molly Faulkner and their “kids” Josie the Beagle mix and Jack the mystery terrier.