Where You Learn "How the World Works"

The faculty of the Economics, History, and Political Science Department stand in solidarity with and in support of African Americans who have suffered systematic and societal violence, oppression, and the unfulfilled promise of American equality.  We endorse the movement known as Black Lives Matter, but also recognize this is only the most recent expression of a multi-generational struggle for African Americans in the United States to be treated with equality, dignity, and respect. We acknowledge that our nation has failed to uphold the principles of justice and equality and has instead responded to the pursuit of those rights with reproach, violence, and apathy.

As scholars of our respective disciplines, we understand both the historic and current systemic injustices that operate through systems of power in the United States.  The exploitation of Black labor and Black bodies began with the nation’s founding. As white Americans reaped the economic benefits of bondage and decried the denial of their own natural rights, they developed and institutionalized racist ideologies to justify the enslavement of others. The inscription of white supremacy in culture, politics, and federal policies perpetuated slavery beyond legal enfranchisement and the granting of citizenship. Destructive mythologies and the criminalization of Black Americans saturated the American imagination and propagated hate crimes and violence for decades. White racism upheld Black codes, miscegenation laws, Jim Crow segregation, political disfranchisement, redlining, mass incarceration and countless other government mandates that denied Black Americans both “equal protection of the laws” and equitable economic and political opportunities as citizens.

Today those inequities continue with manifest racial disparities in wealth, political representation, health care and significantly, the criminal justice system. Black Americans find themselves disproportionately incarcerated, and most tragically, brutalized and dehumanized by state-sanctioned violence. It is in response to that violence and the murder of citizens like George Floyd, Ahmaud Arbery, Breonna Taylor, Jacob Blake and countless others, that we speak.

We–the faculty of the Economics, History, & Political Science Department—commit ourselves to: (1) examining our local institutions and systems at Palomar College; (2) reforming ourselves with a commitment to rooting out both conscious and unconscious biases; (3) Actively engage with Palomar College’s antiracist focus; and (4) support initiatives that move toward social justice and equity. To that end, we endorse the following:

We—the faculty of the Economics, History, and Political Science Department—realize that we have benefitted from the creativity, and the power of Black minds, art, and invention in society but have often left these contributions unacknowledged and uncompensated.  We now commit ourselves to expanding our knowledge in our own disciplines and in outside disciplines about the challenges to a more racially equitable classroom, campus, and curriculum. The promises of American education and citizenship ring hollow until we can fulfill the truth of an equitable society.

The Economics, History, and Political Science Department of Palomar College 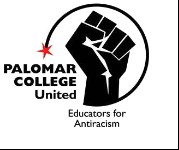