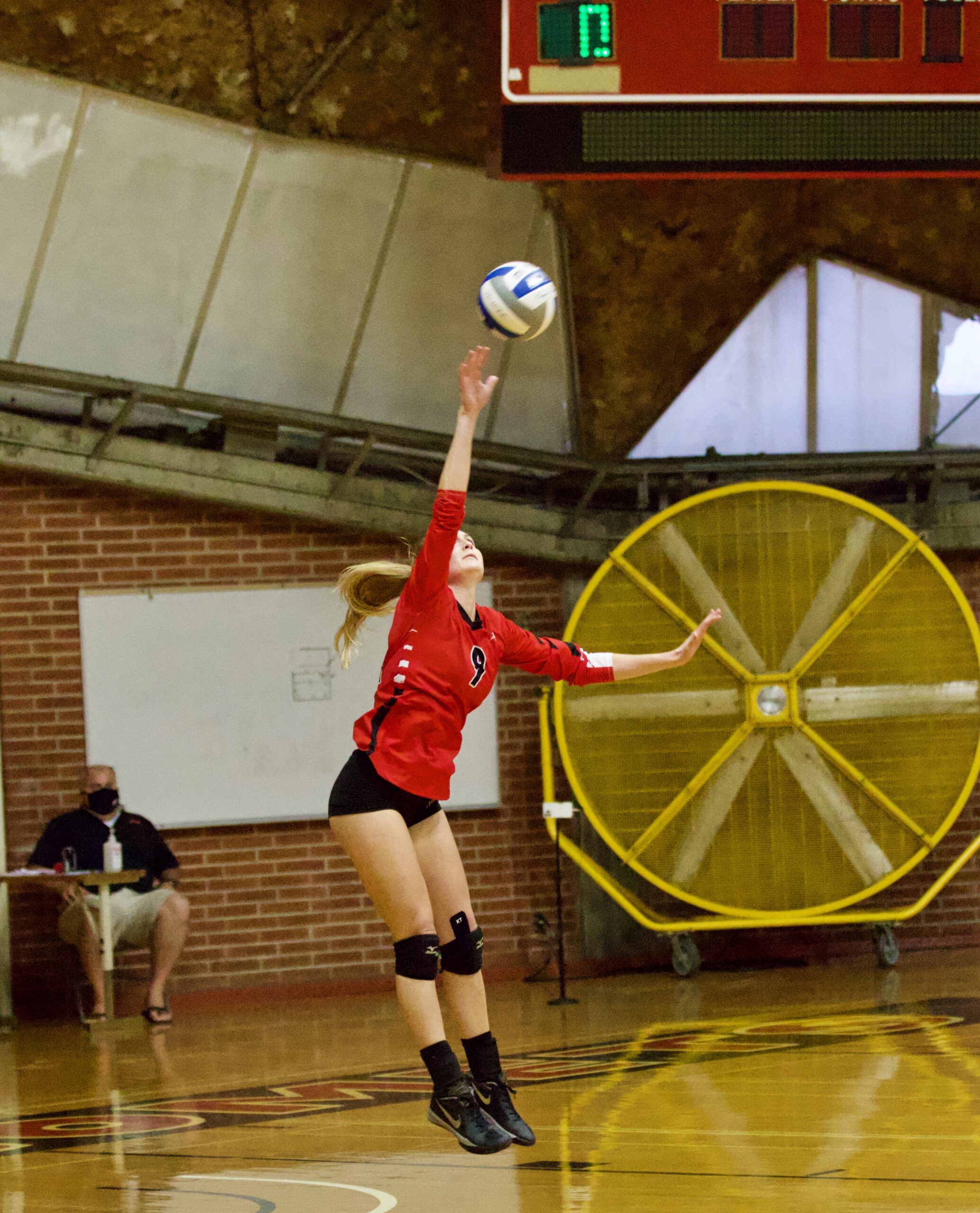 A Look into the Life of a Comet Volleyball player

Recent “Comet of the Week” awardee discusses her experiences with volleyball and why she started playing, as well as what she hopes to accomplish in the future.

Courtney Hoffman (#9) is an outside hitter and middle blocker on the volleyball team and a sophomore at Palomar College.

Hoffman explained via email the reasons behind why she began playing volleyball, and stated that she was first influenced by her sister.

“I started playing volleyball when I was about 6 or 7,” she said. “I started at the YMCA, following my older sister’s footsteps,” Hoffman added.

Hoffman then went on to explain why she enjoys volleyball. She said that she enjoys the fast paced energy of the sport.

“What I love most about volleyball is the quickness, competitiveness and satisfaction of the sport,” Hoffman stated.

“By satisfaction I mean when you get that perfect diving pass or the brilliantly, powerful kill. Those moments of perfect connection with not only the ball itself, but your teammates as well is what Volleyball such a fun sport,” she adds.

As Hoffman described how the pandemic has impacted her progress, she states that although it has affected her personally, it has also sparked an improvement within herself.

“The pandemic has definitely had an impact on myself mentally, but luckily not physically. It has mentally created a lot more stress, pressure, anxiety and fear, but it has also pushed me to be the best version of myself,” Hoffman said.

She then described and explained how the pandemic made her into a better person, and discussed everything she has done to improve on herself.

“It is actually what helped me get into shape by running everyday and lifting,” Hoffman explains.

When asked how the pandemic has had an impact on her academic progress, Hoffman stated that due to Palomar continuing to be online caused slow motivation when it came to her courses.

“It has definitely affected my academic life,” she says. “I think academically speaking the pandemic has decreased my motivation for school because it is all online.”

Hoffman then talked about her dreams and goals for the future, and what she hopes to accomplish and achieve.

“I am majoring in Liberal arts of Science in hopes of becoming a science teacher one day,” she said. “I also want to receive my minor in Astronomy because I have always been amazed by the universe that surrounds us.”

Hoffman’s grandmother, Nancy O’Neil gave insight as to how her granddaughter succeeds at volleyball, as well as what her academic goals are.

Neil first started off by describing Hoffman as a generous person, as well as what she has accomplished.

“She is so thoughtful, the night she won the Miss Escondido pageant she took the time to drive all the way down to La Jolla hospital to visit me in her gown and crown, because I could not be there to see her compete,” Neil said.

“Courtney’s goals are to her her Master’s degree and dreams of being a science teacher in a elementary school because she loves to teach young minds,” Neil added.

To see Courtney and the rest of the Comet Volleyball team in action, visit The Palomar Athletics page or click here to view the Fall 2021 volleyball schedule.