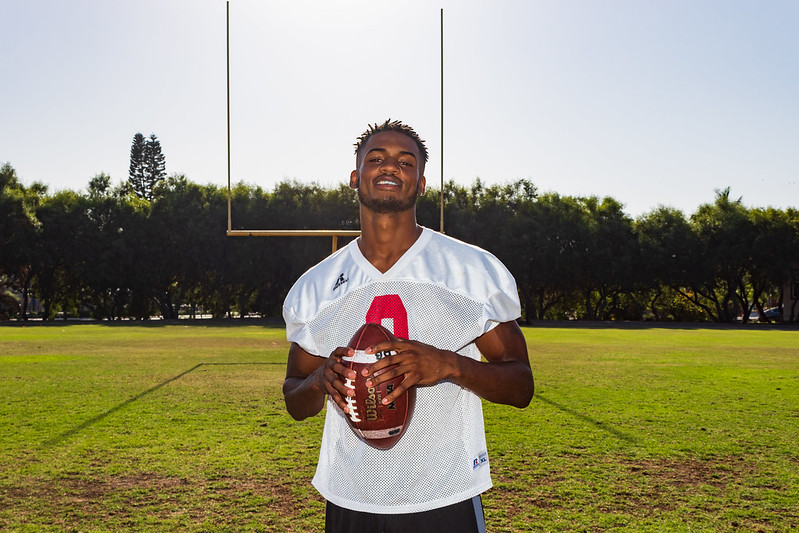 Despite having not played football for seven years since high school, wide receiver Kyran Griffin refined his skills throughout the 2019-2020 season, making him one of the top players for the Comets.

His performance qualified him to receive a full-ride scholarship to study and play at Troy University, a Division I in Alabama.

Born in New Orleans, Griffin served in the U.S. Marines after graduating from West Creek High. When he was stationed at Camp Pendleton, he was ready to take on the next chapter of his life.

“I chose Palomar after my service with the Marine Corps because being in the service, I wanted that same brotherhood I had while I was still [serving],” Griffin said in an email.

He said that the coaches at Palomar welcomed him with “open arms” and the players took him in as one of their own.

“It all felt natural,” Griffin said.

Joe Early, who is the head coach for Comets football, sees a bright future for Griffin.

Although Griffin had not played for several years, Early is optimistic of his improvements and abilities.

“His timing, blocking skills, and route running were becoming more precise and his overall skill set was improving,” Early said in an email interview.

The wide receiver scored seven touchdowns, had 61 receptions, and averaged 74.5 yards in 10 games during the last season.

Griffin is currently majoring in psychology at Palomar and wants to earn a bachelor’s degree at Troy, but in athletics, he said that he would love to make it to the First Team All-Conference or All-American.

“I chose Troy because the coaches made me feel comfortable. I’m from the South so it’s like I’m back home,” he said.

“His verbal commitment to Troy University is based on how he played during the season, his work in the classroom,” Early said. “Ky will continue to get better the more he plays. If he has another good season, he’ll have more offers that he’ll need to decide on.”

However, Griffin’s success is not without obstacles.

“I had a younger brother who was murdered in my hometown in New Orleans who was playing college football and never got the chance to start,” he said. “This was mentally challenging.”

Griffin had only two months last summer to get back into “the swing” of playing football and be ready by the fall. “But Coach Dan and Coach Early stuck with me to make sure I was ready,” he said.

To keep in shape and top performance during the COVID-19 quarantine, Griffin is doing a lot of explosive drills like hill running and footwork.

“If he stays healthy, the sky is the limit for him. He’ll continue to get better the more he plays. He has the physical tools to be very successful,” Early said.