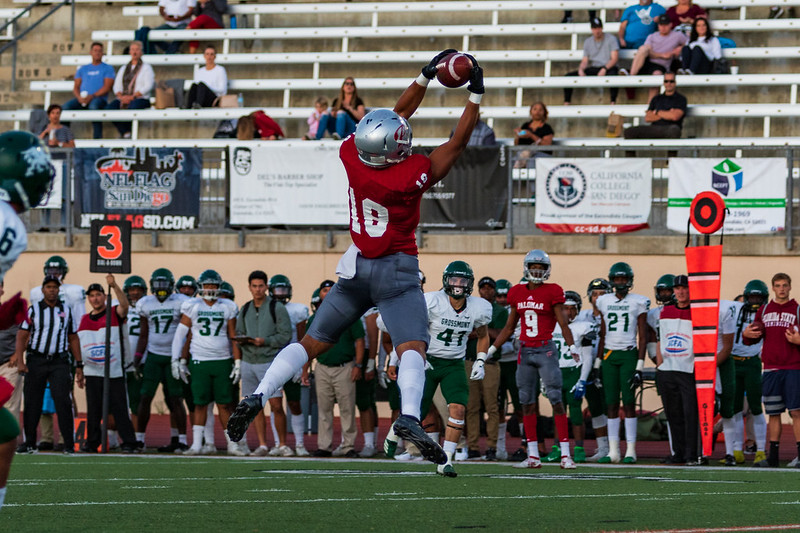 Defensive party for the Comets

The Comets beat the Grossmont Griffins 36-14 on Oct. 5 for their final non-conference game.

It was the best defensive showcase by the Comets this season. As a unit they only allowed 152 total yards. 158 of those were through the air, most of which came late in the game, and they gave up a whopping negative six yards on the ground.

The defense made its impact early with an interception by Jay Craft on the first Grossmont offensive drive. That lead to a 39 yard touchdown from quarterback Rodney Thompson to tight end Isaiah Batton to put the Comets up 7-0.

After the game Batton said, “The safety miss played my route on that play so I was just praying the ball would come my way and it did. We game planned to beat them downfield and we did that early in the game.”

Batton finished the game with 85 yards on seven receptions and one touchdown.

Kevin McKinzie and Kameron Camp would join the pick party for the Comets when they each picked off Grossmont on the next two drives.

Palomar added two more touchdowns before the half. The first one was a one yard scramble by Thompson and the second one was also a one yard score from running back Daishawn Lee. The Comets led 19-0 at the half after missing an extra point and a two point conversion.

The defense only allowed 43 yards in the first half and added three sacks.

Head Coach Joe Early was impressed by his defense. He said, “They played well as a unit… we felt coming in that we had the advantage in the trenches and it showed tonight.”

The Comets added to their lead in the second half when Damon Wigand ran for a four yard touchdown to make it 26-0. They would add a field goal early in the fourth quarter to make it 29-0.

Penalties mounted quickly for the Comets throughout this game, and they led to Grossmont ending the shutout with two touchdowns in the fourth quarter.

After the game coach Early said, “I’m really disappointed that we had 14 penalties for 137 yards, that took 21 points off the board, we need to clean that up.”

In between the Grossmont touchdowns the Comets ran an eight minute drive that resulted in Thompson finding Johnny Armentrout in the end zone to cap off their 36 point performance.

The Comets finished with 430 yards of total offense. Thompson threw for 316 yards. Wigand was the leading rusher with 10 carries for 41 yards and a touchdown. Kyran Griffin had seven catches for 93 yards.

Kobe Dominguez had a huge defensive performance with 11 tackles and two sacks. Camp had four tackles and an interception. Tommy Woo had a few huge hits and recorded a sack.

This game was the sixth straight victory for the Comets against Grossmont.

The Comets are now 2-3 and have a lot of work to do going into their bye week before conference play starts.

Three positives that coach Early and Comets players felt came out of this game were: they won, they fought through adversity and they came out mostly healthy.

Their next game is Oct. 19 at Mt. San Antonio College to open up conference play.