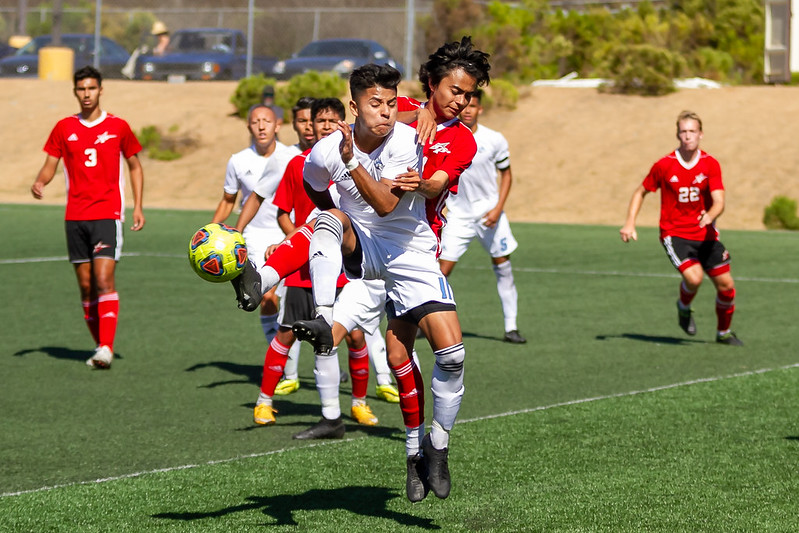 The Comets were organized and confident from the start. A couple of fast breaks by #9 Arturo Soltero,the Comets lead scorer, provided immediate pressure on their opponents defense.

Cuayamaca nudged back, then back did the Comets, as the game started to get physical. “Push! Press up! Push more!” yelled both coaches.

One of the Comets starting center backs, #22 Chandler Dittoff, saved a goal himself while diving behind his goalie.

Then on another fast break, which should have been called for offsides, goaltender #1 Caleb Daza made a huge save for his team. This motivated the guys, knowing their keeper had their back.

With five minutes before halftime, the Comets earned a couple back to back corner kicks and several possible goal attempts.

Soltero was given a yellow card during the last two minutes and then the whistle was blown. No score at half.

It wasn’t shortly after the initial goal of the game when Palomar fired back and earned a penalty kick to be scored by #20 Christian Bahena. Tie game.

The teams literally butt heads with each other, which injured a Cuayamaca player.

Controlled touches, patience and skill were all on display by the Comets, and they knew they could win this game. They nearly took the lead off of a free kick cross attempt but it bounced an inch over the goal.

#17 Seth Murphy held the midfield down well all game for the Comets, often tackling and stealing the ball. Murphy even had a great left foot shot on goal with 12 minutes left.

This game was competitive the entire 90 minutes and only gained intensity by the moment.

Final whistle blew, and that was it, a 1-1 stalemate, as intense as it could get.

Palomar’s next home game is Oct. 15, at 1p.m. against Imperial Valley College.