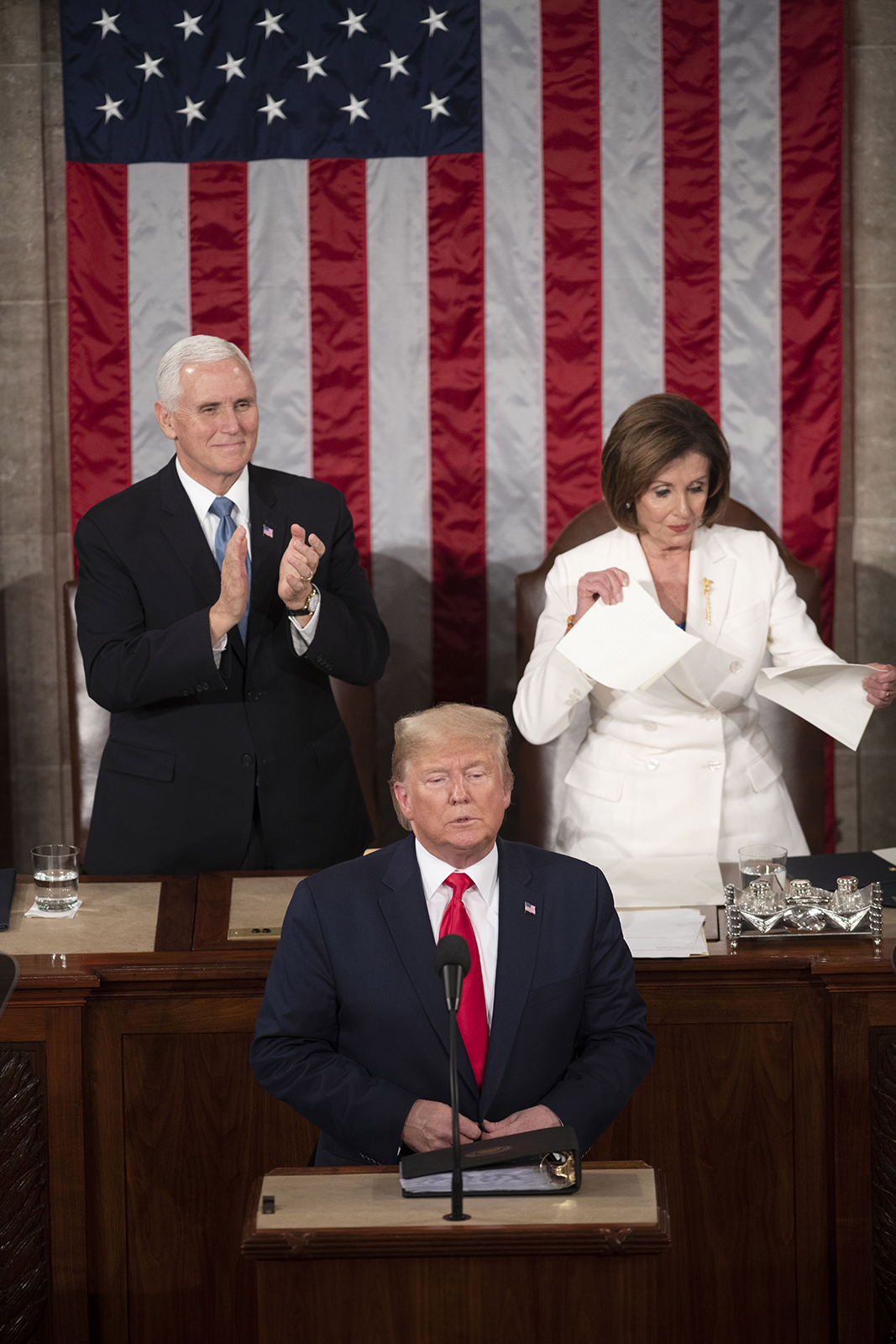 The Telescopes take on Trump’s State of the Union Address

This past week President Trump gave his State of the Union Address. Here are some opinions from the Telescope staff writers on the speech.

President Trump claims blue collar wages and jobs are on the rise, but data shows the opposite

President Trump said at the State of the Union that there is a “blue collar boom,” but the data behind his statement shows the opposite.

The president delivered a 90-minute speech on February 4 at the Capitol that includes the “rise” of American jobs and wages during his presidency.

Trump’s statement reflects the recent trade deals Trump signed, which are the United States-Mexico-Canada Agreement (USMCA) and the U.S.-China Phase One deal. The Economics Policy Institute, a non-profit, non-partisan organization that focuses on issues within the low-income workers, said that these agreements will likely “lead to more outsourcing and job loss for U.S. workers.”

In fact, the Phase One deal would make the U.S. depend more on China for trade because China is a government-controlled economy, which allows its government—not the market—to increase, reduce, or cut off the amount of U.S. exports it wants. China has the upper hand, not Americans.

The trade deficit between China and the U.S. from 2001 to 2018 has already cost more than 3.7 million jobs, including 2.8 million manufacturing jobs. During the first two years of the Trump administration, the U.S. had lost about 700,000 jobs, and the new deal with China and other of Trump’s policies will not likely bring back those jobs.

I thought that the 2020 State of the Union was great because of the showmanship President Donald J. Trump displayed.

The President invited a lot of people into the First Ladies box to observe the speech. Some of the people that were invited was Rush Limbaugh the famous radio host and the Davis family from Philadelphia. Many members of the military, military families, and families from across the nation were invited to sit in the box with the First Lady.

The Davis family that President Trump had invited were given a scholarship for 4th grader Janiyah Davis. They were given this scholarship due to Janiyah being assigned to low-performing schools. Her mother Stephanie tried to apply for a tax credit scholarship to help her daughter, but was put on a waiting list with about 50,000 other students. This scholarship allows Janiyah and Stephanie to choose what school she wants to attend.

President Trump also had a surprise for a military family that was attending the speech. The Williams family was surprised with the return of Stg. 1st Class Townsend Williams. This homecoming sparked emotion at the speech and created a lot of applause from the crowd.

Although I’m not a political person, I did find the State of the Union speech very entertaining.

President Donald J. Trump delivered an hour and a half speech Feb. 4 at the Capitol and Trump made things entertaining.

I think that making the theatrics more exaggerated could easily make people forget the information that he is spilling. He surprised Rush Limbaugh, a pro-Trump radio host who just released he has lung cancer, with the Presidential Medal of Freedom. Melania Trump put the medal around his neck in a fashion that was easily made for television performance.

He kept surprising people with other things like a talk show host. In a way, the only information that he really stated was the ideas of surprises and family reunions. The chant of “U.S.A” was ringing in the room when Sgt. First Class Townsend Williams, who is on deployment to the Middle East, made another surprise for television. He appeared in the first lady’s box and reunited with his wife and two kids.

There was definitely tension in the room when she broke tradition by only saying “the President of the United States,” rather than to be having the honor of introducing him. Before the televised theatrics, Trump had given a copy of his speech to Nancy Pelosi. At the end of the speech, she stood behind Trump and tore the speech in half. While I don’t think this was a theatric event it definitely was a statement that everyone was talking about the next day. People came out with their own statements about how they felt about it.

Trumps’ speech was more of a reality show filled with surprises and reunions rather than what really needed to be addressed. He browsed the topics very briefly but then kept surprising like he was a talk show host giving out their guests’ album. It was more of a rally not the State of the Union address.

The long-running feud between President Donald J. Trump and the speaker of the House, Nancy Pelosi played out during the President’s State of The Union Address.

President Trump delivered an hour and half speech Feb. 4 in the Capitol. American’s and viewers across the world witnessed the President snub and refuse to shake the hand of Speaker Pelosi before he began his speech. When the president approaches the dais and hands copies of the speech to the Vice President Mike Pence and  Pelosi, she offers her arm out to shake the president’s hand, which he purposely ignores.

We witness the shock in Pelosi’s face with the disrespect he shows which is viewed worldwide. Setting the tone, the Speaker Pelosi not wanting to lose the tit for tat, while introducing the President made a distinct point to defer from the traditional introduction.

The introduction usually includes “honor” and “privilege”, but she introduced Trump as simply “the President of the United States”. During the speech the president awards a medal of freedom, surprises a military wife with the return of her soldier husband, surprises a fourth grader with a scholarship, and introduces the Venezuelan opposition leader Juan Guaido as a surprise guest.

With the conclusion of the State of the Union address, House Speaker Pelosi rips the copy of President’s speech in half. This blunt reaction from the Democrat Speaker will leave a sour taste in the Presidents mouth. When the Speaker of the House told House Democrats why she tore the speech up, her response was “He shredded the truth, so I shredded his speech.”

Whether you are team President or team Pelosi, we need all Americans to get out there and vote this year. Voting give you the chance to make a change and made your voice heard.