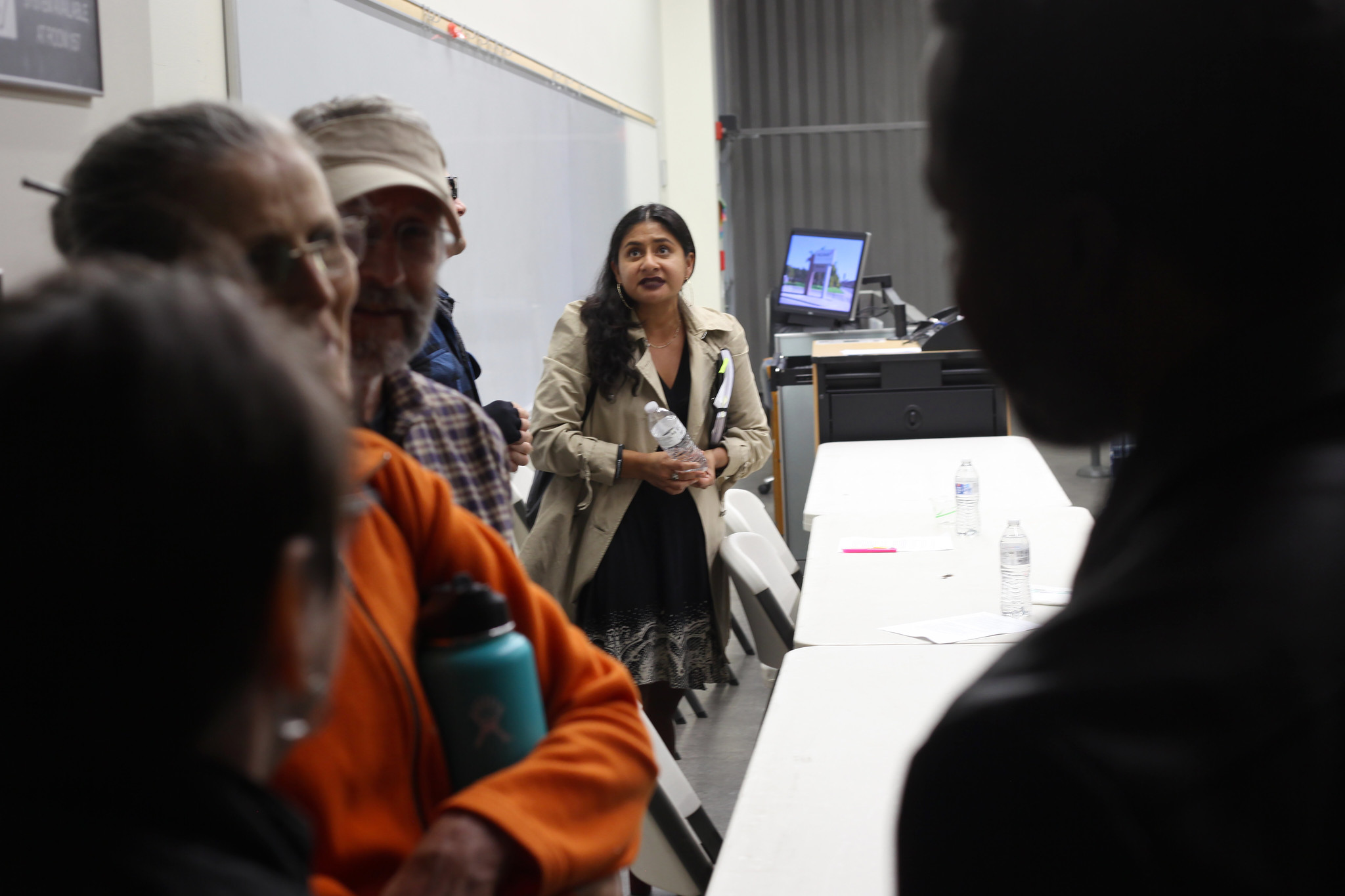 Uprooting a culture of Mass Incarceration

Some blame police brutality on a few bad apples in law enforcement. Some blame mass incarceration on drugs or rising crime.

Despite violent crime dropping drastically since the 1990s, the U.S. prison population has grown 500 percent in the last 40 years, according to Pew Research Center. African-Americans are eight times more likely to be imprisoned than whites in the U.S. These statistics point to a larger cultural problem rooted in bias and policies of criminalization of communities of color that spawned rotten apples by the bushel, resulting in what is called the “Prison Industrial Complex”.

Palomar College’s M.E.Ch.A. club organized a panel discussion on the Prison Industrial Complex, where panelists discussed how it affects our communities and how individuals can hold our lawmakers and police departments accountable for their actions.

“The Prison Industrial Complex is basically the overlapping interests of government, industry and the use of surveillance, policing, and imprisonment as a solution for economic, social and political problems,” Brian Harris said, a panelist and Palomar sociology professor.

The panel featured members of the community, ranging from sociologists to advocates for racial justice and prison reform. Speakers helped break down some of the realities of relations between communities of color and Police and the need for reform in the justice system.

Terms such as mass incarceration, prison industrial complex, and for-profit prisons are overheard in the media everyday.These media terms may seem hard to relate to our everyday life. Yet for people of color who have experienced decades of segregation, discrimination, and criminalization of their communities, the experiences are all too familiar.

“They’re making money off of incarcerating people, and who are they incarcerating? Black and brown people,” Yusef Miller said, a panelist and member of the Racial Justice Coalition. “Who do they feel is expendable? Who no one will miss? They assume. It’s a grooming mechanism and people are making money off it, which is very insidious.”

The Prison Industrial Complex (PIC) has morphed into a perverse network of contractors and lobby groups that prioritize personal financial gain over rehabilitation of criminals. Through political influence and lack of oversight these private prisons benefit economically at the expense of the incarcerated. Since its inception in the 80’s it has grown to 5 billion dollar industry according to theweek.com.

Rocio Zamora, a panelist at the event, shared with attendees that her cousin, Jonathon Coronel, was gunned down in a confrontation with police in July 2017. Coronel’s death was later ruled as justified by San Diego’s District Attorney, Summer Stephan despite conflicting eyewitness accounts.

Zamora spoke on how her family was affected by Stephan’s decision to justify Coronel’s death.

“[My cousin] was unarmed, in compliance with the police officer and was still shot 17 times,” Zamora said.

Coronel was shot by Sheriff Chris Villanueva. This was Villanueva’s second killing of an unarmed suspect in less than a year, according to Zamora.

Nearly 41 percent of all people killed or injured by police were Black or Latinx between the years 2016 and 2018 in the City of San Diego, according to policescorecard.com.

Jonathan Coronel, 24, was unarmed and compliant, when he was shot 16 times and killed by police on July 5, 2017. #O22 #NationalDayAgainstPoliceBrutality https://t.co/Se7Li51Axa

This despite black and Latinx people only making up 27 percent of the city population. Nationwide Black people make up only 12 percent of the U.S. population but makeup 40% of U.S prisoners according to wikipedia.org.

Harris mentioned that the 13th amendment to the constitution creates a loophole in which prisons can exploit inmates by contracting them out to corporations working for slave wages. This incentivizes private prisons to lobby for longer sentencing laws

“We’ve left that loophole in there,” Harris said. “This is how, in this day and age, it’s been reinterpreted or used to the advantage of those in power.”

“We are living in a two-tiered lie in this country, the first one is one nation under God indivisible with liberty and justice for all,” Miller said. “The second one is that you can pay your debt to society.”

Zamora and Harris discussed the racial disparity of Ronald Reagan’s “War on Drugs”.
Reagan’s laws carried a mandatory 5-year sentence for 5 grams of crack yet a person with 100 grams of cocaine received that same 5 year sentence. This led to mass incarceration of inner city youth, mostly people of color. Bill Clinton’s Crime Bill continued this War on Crime with a 30 Billion dollar expansion of prisons.

“On this prison industrial complex, the relationship between incarceration and business is really toxic to our environment,” Miller said. “Every cell for one of you is paying someone’s bills.”

Further, Miller said that if a prison has not reached full-prisoner capacity, then the state or city will be responsible for paying for the spaces.

“This incentivizes the prison and law-enforcement to incarcerate people over minor issues to make sure to give harsher penalties and to make them fill these prisons and keep them occupied,” Miller said.

Zamora said that the culture of racial bias, escalation and unaccountability of police is a nationwide problem.

“This is not a case of bad apples, and it’s not an individual case of, you know, someone who was killed,” Zamora said. “This has been happening for years. It’s a part of a larger system such as the prison industrial complex, and how that has actually dehumanized people, such as my cousin.”

Other panelists such as Genevieve-Jones Wright (former candidate for District Attorney for the City of San Diego), and Darwin Fishman of Activist San Diego urged activism and showing up to Community Review Boards, joining the Racial Justice Coalition and voting for candidates that don’t take money from private prisons.

They pushed support for bills like AB 392 and that hold police accountable for their “necessary force”. They also urged protests against companies such as Core-Civic and Geo Corp which operate several prisons and immigrant detention facilities in California and have donated 1.6 million to Trump’s campaign in 2016. Many panelists mentioned the training of police officers needs to improve to cure implicit bias and racism.

A common thread of the night was the emphasis on getting involved, showing up, staying informed. Some of the students that attended were from Chicano studies courses and engaged in dialog with the panel.

Gregory Mendoza, is a Co-Chair of Transitions Collective, a club at Palomar that supports and empowers formerly incarcerated individuals and system impacted family members.

“We’re all people coming home you know, like so, I like to pay it forward, you know. What was done for me, that’s what I do for somebody who gets released, that goes to Palomar,” Mendoza said.

By connecting people with resources to housing, jobs, resume services, food assistance or even just a one on one talk for emotional support, it breaks the cycle of feeling excluded and creates space so that all people can feel that they have a seat at the table. Transitions Collective offers help to students at Palomar College, MiraCosta College and Cal State San Marcos.

Another thread was changing the culture of criminal justice and policing from one of no accountability, escalation and implicit bias to one of de- escalation, transparency, and rehabilitation.

Jones-Wright explained, “Just because you want to hold police accountable doesn’t mean you are anti-police, all people deserve dignity”. By engaging in dialog and pushing for better policies to create more opportunities it could reduce people turning to crime, and by fighting for reforms to a flawed justice system it is possible to reverse these effects but only if you get engaged.

Many states have taken measures to reduce sentences for non-violent crimes and California passed AB 32, which phases out private prisons in California over the next 8 years.

“It’s going to take a while for the train to stop, right? It’s starting to slow down mainly because of the awareness. They’re becoming aware that this is a problem that is affecting communities unfairly,” said Professor Harris.

Many people may feel that their voice won’t make a difference, or that one-person can’t create change. I am reminded of Rosa Parks that after years of being discriminated against and criminalized for simply riding a bus, she refused to yield to an abusive justice system. Her actions sparked protests, boycotts, marches and eventually political and legislative action. She became educated and aware of her power to stand up.
Martin Luther King was jailed and branded a criminal for marching for social justice in Selma.

Yet Martin and Rosa spoke up, they elevated their voices and shouted the names of their brothers that had been mistreated. They got involved. When we stand up for those that have been silenced or shot we all benefit.

Zamora pleaded for others to not become numb to violence and injustice.

“It’s easy to feel that you don’t have enough power,” Zamora said. “But by not recognizing that we have power is how we give up our power.”