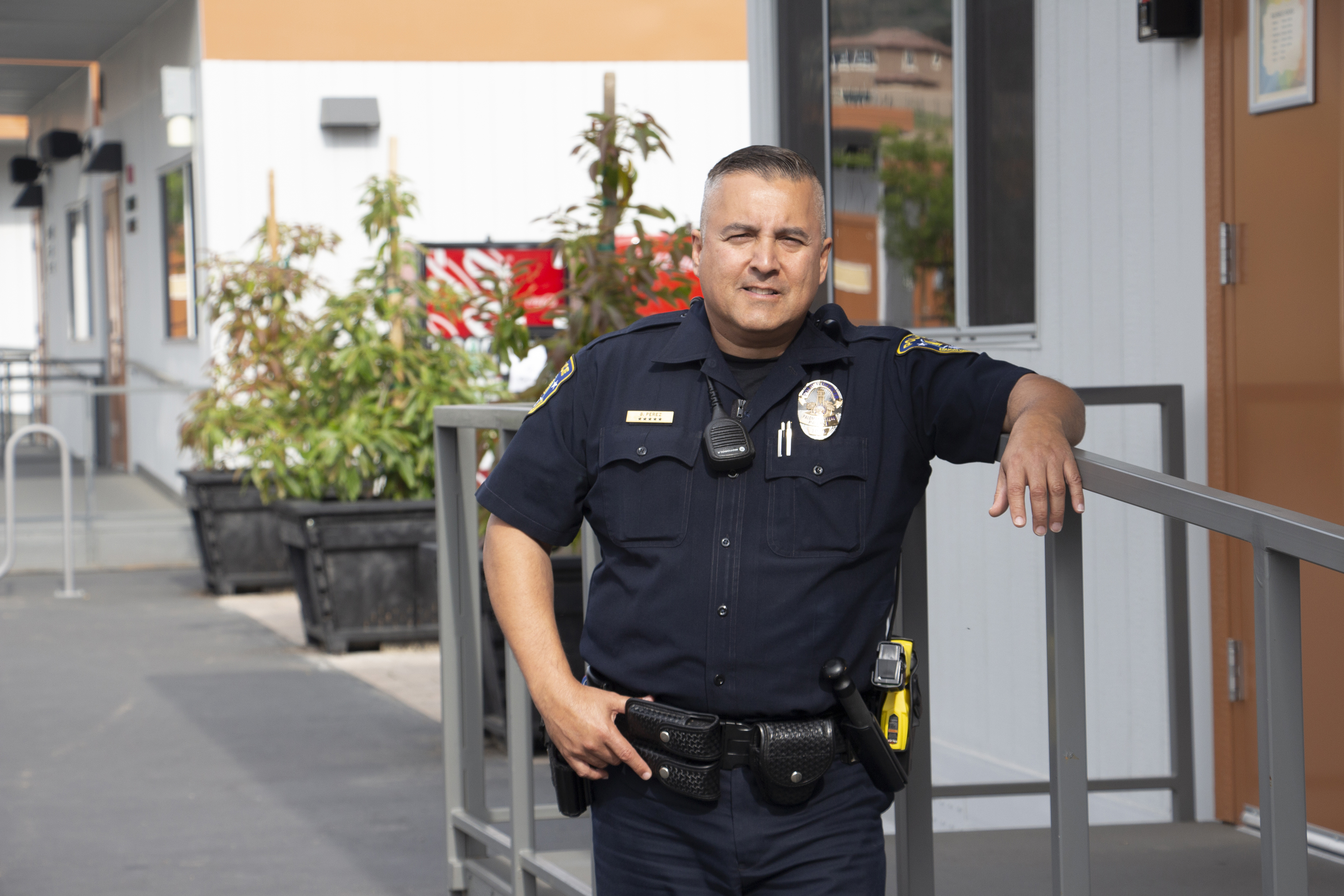 If you ever walk across Palomar College with Officer Gerard Perez, be prepared for students and staff to greet him, shake his hand, or stop to chat.

The Palomar College Police Department places an emphasis on community outreach, and Perez is the face that the campus police has chosen to represent them in English as a Second Language (ESL) classrooms.

For the past four years, Perez has been visiting Palomar ESL classes to connect and communicate with students. At a time when many are wary of corrupt law enforcement, the PCPD places importance on establishing relationships with the campus community.

According to Perez, the PCPD’s mission when reaching out to ESL students is broad. He accentuated the importance of transparency so that students can see the campus police as approachable and not as an adversary.

“The mission [is] to be open, to have a good relationship, to respect each other in a positive way,” Perez said. “And to let them know that we’re part of the process [of]…international students or ESL students, coming and getting their education.”

Perez said the goal repeats itself every semester with each new group of ESL students: to encourage them to continue pursuing an education and ensure that they’re comfortable on campus.

Perez explained that many ESL students are from countries like Mexico, Honduras, and Guatemala where much of the interaction with law enforcement is negative.

In the United States, Perez claimed that students regard the police with more respect but are still hesitant to approach officers due to previous experiences and immigration laws.

He hopes to ease their anxieties by answering “why” questions, such as why the police issue tickets, and making himself available to students.

Oliver Dávila, an ESL student from Guatemala who has been living in the U.S. since Aug. 2016, expressed how it’s good to know that law enforcement can be trusted and work together for the overall safety and improvement of the community.

“As an immigrant it’s hard to be far away from home and living in a new country where the laws are different and you can feel afraid and unprotected,” Dávila said.

Having met Perez through his class, Dávila said that the officer has changed his perspective about the police. He is no longer worried about his immigration status or afraid to ask for help if he needs it.

Palomar College ESL instructor Christina Fatseas said that Perez approached her at the beginning of the Spring 2019 semester and has since visited her class on multiple occasions. Perez has established himself as a friend to the students, not just as their protector.

“I would say that my students feel an open door policy with the police as a department because of Officer Perez,” Fatseas said.

Perez, whose parents are from Mexico, feels as if he can relate with ESL students.

“[They] have to see that I’m sincere,” Perez said, “They have to know that I’m a real person, not just this persona of being a police officer.”

As an outgoing and personable character, Perez’s personality is what deemed him a good candidate for ESL outreach.

The PCPD first approached Perez about speaking to ESL classes when the societal climate was fraught with problems. Perez said the department wanted to increase interaction between the campus police and students, as fear was being generated among international pupils by incidents covered by the media. 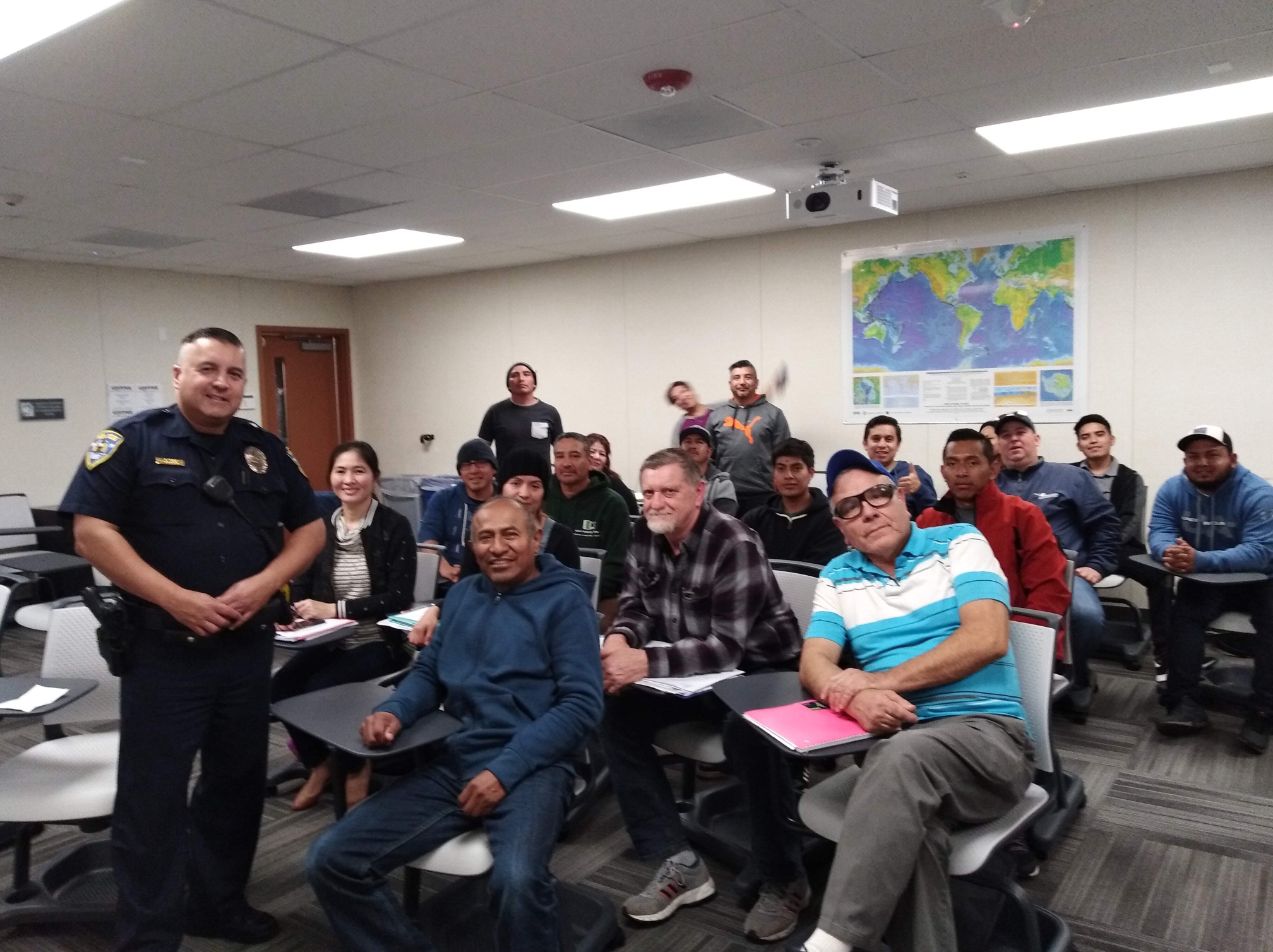 Once he was selected as the liaison, the program commenced. He recalled the first time speaking to an ESL class as unsuccessful.

“To this day, I still feel bad for that class because that class actually got the brunt of how this whole thing started,” he said, “They were the experiment.”

Perez says he was prepared with an arsenal of notes from which he explained law enforcement policies and procedures, how many officers the PCPD employs, and other information about the campus police.

He didn’t receive much response from students, saying that what he needed to show was “the guy behind the badge.”

He took a different approach in the following session. Instead of lecturing students, he connected with the class by describing his upbringing, getting to know them, and having casual conversation.

What was supposed to be a 15-minute talk turned into a 40-minute discussion, despite the professor’s attempts to resume the class.

“I just had so much fun with it and we were having such a good time talking,” Perez recalled.

It was the difference of two classes that launched this adventure for Perez. Although Palomar College attempts to make all students comfortable on campus, one-on-one relationships like those established by Officer Perez are invaluable.

Fatseas regarded the effort of the PCPD with respect, saying, “I believe the officers’ actions are exemplary with regards to community outreach.”