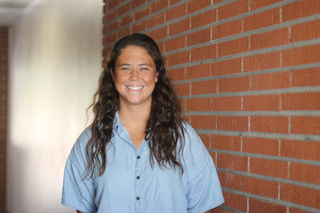 Kelly Rowan has been a student and athlete at Palomar College since 2016 but has been playing water polo for eight years.

“My friend’s mom’s thought I’d be good at it (water polo) because I was very boyish and aggressive,” Rowan said, “I ended up really liking it and I’ve played for eight years.”

When it comes to juggling school and sports, Rowan mentioned that it can often be difficult to play the roles of a student and an athlete. Despite this, Rowan said that she’s never had a difficult time with professors and that they’ve all been understanding with her circumstances.

The women’s water polo coach, Mandy Simon, said that as a captain Rowan takes initiative to delegate and lead the team. Simon said that Rowan makes sure that things get done efficiently, which helps hold the team together.

“I’ve known Kelly for a couple years, and she’s grown a lot as a leader,” Simon noted, “So, just seeing her develop in that way, I can see that translating into other areas of her life, whether that be a career or a family, I think she is going to do well.”

Teammate, Haley Balch said that Rowan was the first person on the team she befriended, noting that it helped her transition to become part of the women’s water polo family.

“She’s well respected on the team,” Balch said, “it makes it really easy to have a center guide to know this is what we are doing, this is how we’re going to do it, everything like that. She’s a really strong authority figure for us.”

When discussing her future goals, Rowan mentioned that she’ll pursue water polo until she finishes at Palomar.

A few of her hobbies outside of school and water polo include anything that involves being in the water, hiking or frisbee golf.

Rowan is currently pursuing a degree in Liberal Studies to become a teacher, and will also be taking a semester off school to receive a massage therapy certificate.