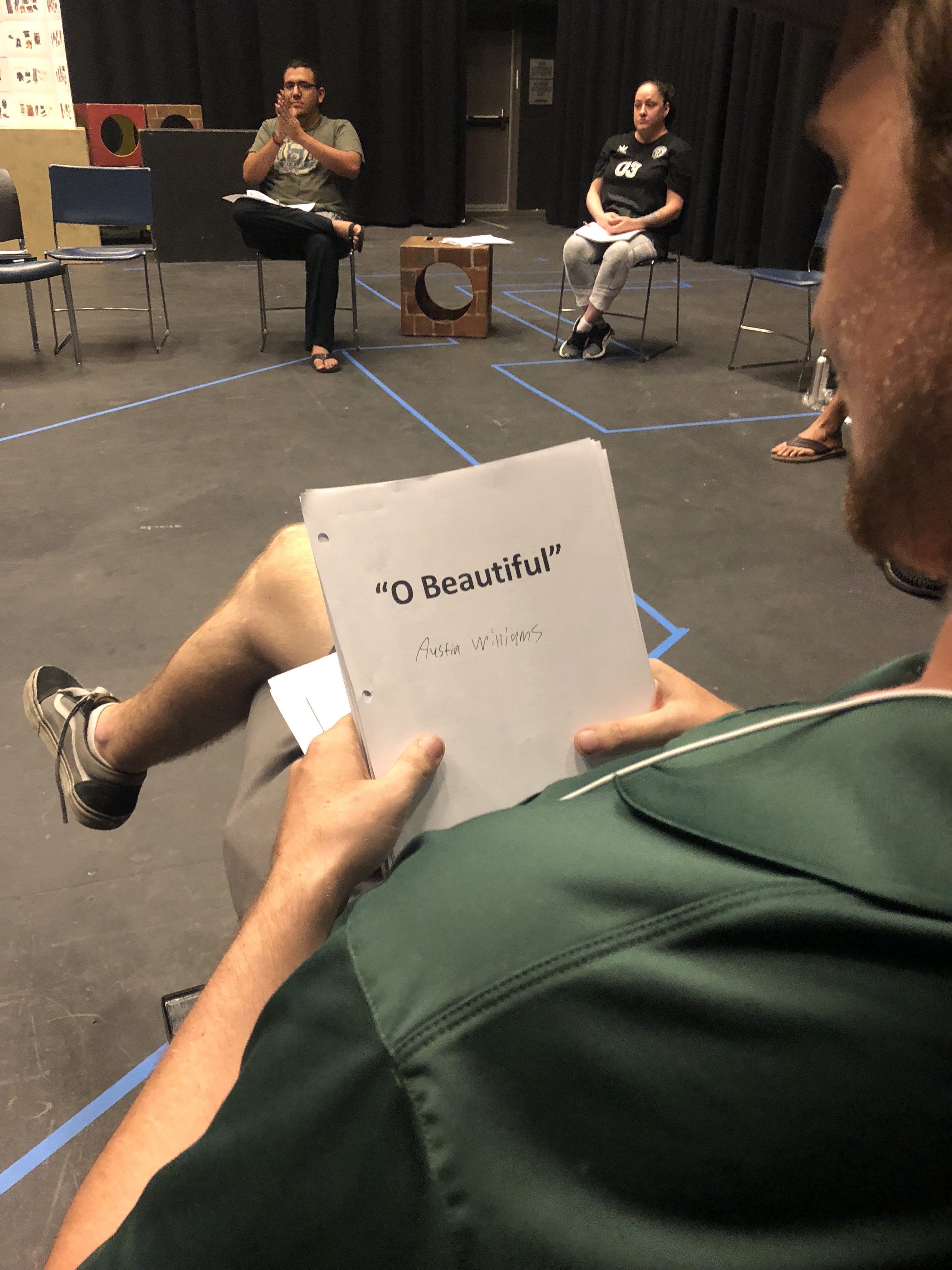 “O Beautiful” shows society through the eyes of women, hardships

2018 has been named the year of women, and Palomar Theatre Arts is on board.

Every year Palomar’s theatre department highlights a specific theme throughout their production season, usually relating to something relevant in society. With recent influences of women’s rights, the 2018-2019 season will be focused on works by women.

“The idea that this semester and next semester all our plays are done with one thing in mind is to reflect what is going on around us,” Ingrid Trovão, Palomar Alumni and part of the production team explained. “A great opportunity right now is how we see gender and we look at individuals around us…to create a space where we can empower women.”

On Aug. 27 the cast of the first production of the season, “O Beautiful” gathered together for their first table reading. The play will be directed by Faculty Advisor Michael Mufson, alongside Colette Culbertson who will be making her directing debut with Mufson.

“O Beautiful” is a play written by Theresa Rebeck, and is centered around a female who contemplates having an abortion, and then decides to go through with it. Rebeck had felt this was a rare, but relevant outcome portrayed in the entertainment industry.

After being turned down by various entertainment platforms, Rebeck received a grant from the University of Delaware, which enabled her to write a play highlighting historical and contemporary themes.

The play “O Beautiful” was created, highlighting various difficult social issues such as date rape, suicide, gun rights, as well as incorporating aspects of American history from a women’s perspective.

Mufson addressed the cast stating, “this play has some really tough, raw, emotional situations…We need to create an atmosphere where those actors feel safe and brave.”

“O Beautiful” played a part in inspiring Culbertson to take up directing. She feels it is a way to approach her peers that one cannot do when acting alongside them  As a pro-women activist and Rebeck being one of her favorite play writes, Culbertson encourages audiences to come see “O Beautiful.”

“I think it is a story that everyone needs to hear especially if you are interested in hearing about the women’s perspective, kind of the outsider’s perspective in general in our society,” Culbertson said. “It will make you laugh, it will make you cry, and it is going to be a lot of fun.”

Cast member, Omar Fox, who will be playing the role of Jesus Christ and considers himself a feminist, explained being part of a play and theatre season geared towards hearing the woman’s voice is empowering.

“I think it is very important that as men, we are there to support, but not to hinder, not to take the attention away, but to give to it … to give to stimulating the idea of women empowerment,” Fox said.

Rebeck worked to create a play built upon perspective, compassion, raw emotion, and striking up an honest conversation.

The character Benjamin Franklin states at the end of the play, “what we really need right now is compassion, real debate, and working together for solutions.”

Performances will begin Oct. 5 and run through Oct. 14 at the Howard Brubeck Theatre. The Friday and Saturday shows will be at 7 p.m. Sunday will be at 2 p.m. Thursday will be at 4 p.m. and will be followed by Coffee Talk in order to discuss the ideas and concepts portrayed in “O Beautiful.”

For more information regarding “O Beautiful” and the upcoming season consult palomarperforms.com.