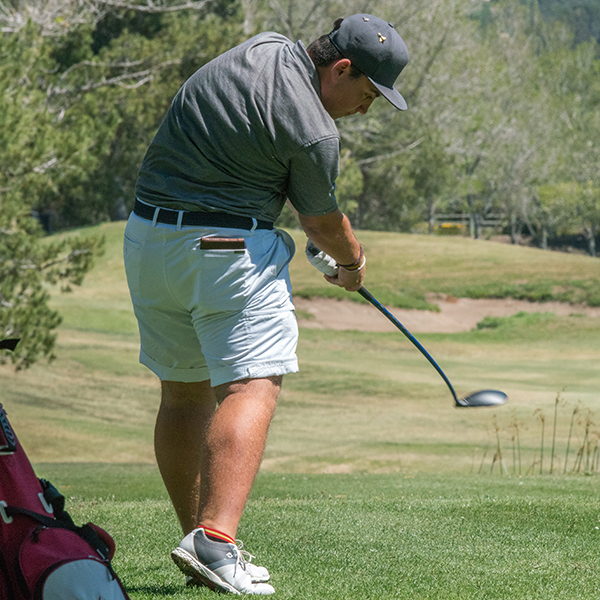 From Spain to Palomar for the love of golf

A little over a year ago, Jaime Sanz, left his homeland of Spain, his mother, and brother to join his father in America to follow his dreams of becoming a pro golfer.

“My father applied for a green card, and I wanted to study [at college] while I was playing golf. In Spain that is very hard to do. So, we decided to move here,” Sanz said.

Sanz is 19 years old and in his second season with Palomar’s men’s golf team. He began playing golf when he was 8 years old, and now he aspires to one day be a pro golfer.

Sanz’ dad got his green card, a job at a winery in Ramona, and worked to move Sanz to California with him after he finished high school, in hopes of him attaining both his golf and academic aspirations. Unfortunately, the entire family was unable to come. Sanz’ younger brother is still in high school and needs to finish his studies before his mother and brother can move here and the Sanz family can be reunited.

“It’s something that you have to do if I want to reach my goals then I have to sacrifice something. So I feel like that is a sacrifice,” Sanz said. “They [Sanz mother and brother] came here last month in February and I got to spend like a month with them, now they are back because my brother has a test to do in Spain.”

Sanz first joined Palomar’s men’s golf in the 2017 season, when his father gave head coach, Mark Halda, a phone call to get his son a tryout with the team.

Coach Halda stated, “It’s interesting because I first got a phone call from his father, who was working at a winery in Ramona and said that his son is living in Spain and is going to come live with him and can he play golf at Palomar. So he came out last year and tried out, and hit the ball real solidly but wasn’t scoring well enough. So he didn’t play the first few matches last year.”

Coach Halda has been impressed by Sanz in many aspects. As he has been settling in to living in a new country and learning a new language, Sanz has come a long way.

“The impressive things about him [Sanz] is his work ethic, the way he hits the ball, and he has a great feel for the game,” Halda said.

Sanz explained that it was a bit difficult coming to a new place where he regularly had to speak a new language and adjust his life to a new culture saying, “In Spain we learned more like grammar than speech, so when I came here first it was like I was rusty in my conversation, I wasn’t comfortable. But now I am more comfortable.”

Coach Halda felt that once Sanz adjusted to a new environment that he really began to rise to his potential as a golfer.

“I think that was part of coming from Spain to Southern California, English is not your primary language, completely different culture, completely different area, it took him a while to settle in,” Halda said. “Part of the cool thing was the team embraced him, and then once he felt comfortable in his surroundings…his scores started coming down and he started playing a little better.”

“He is the best. He is from Spain and he is probably one of our stronger internationals and he is going to do well this year,” Gorman said.

Aside from becoming one of Palomar’s top golfer’s, Sanz has also exceeded academically. He is working towards a degree in business and hopes to transfer to a four-year university in order to finish his bachelor’s degree.

Sanz had outstanding grades in the Fall 2017 semester and was just submitted to the state of Caliornia for Academic All State in golf.

“I would like to transfer to a four-year university and finish my two years of work that I have, and then play professional,” Sanz said.

Coach Halda has big hopes for Sanz in his future with golf and in his career as a student. Halda feels Sanz has yet to show his best playing and is excited to see him continue to improve and become the best golfer he can be.

When asked about the differences between living in Spain and living in California, the type of food is what stood out to him. Even with all of his accomplishments at such a young age and a bright future ahead of him, Sanz still really misses him mother’s home cooked meals most of all.

“I ate better in Spain than here. I feel like almost everything is fast food here. When we go out to a restaurant or something it’s like fast food. It’s very different than Spain,” Sanz said. “I like the fast food, but I don’t like that all is fast food. I miss my mother’s cuisine.”