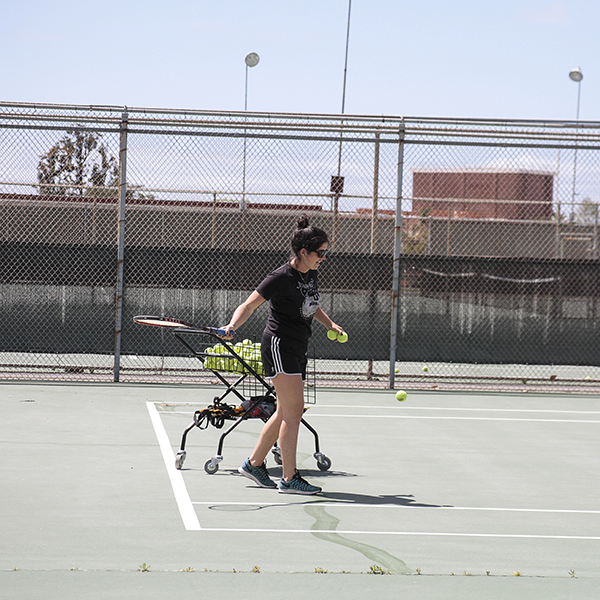 Four girls surround Coach Carly de Anda as she tells them to hit the ball down center-court.

“Lean into your swing,” she stated, bending forward and giving a sweeping gesture with her arm. This would be one of several different exercises to get the girls warmed up for practice that day.

Midway through practice, tennis balls were scattered around the court, at least a few dozen bouncing off the back fences and around the players. While practice is going on, the girls are moving up and down the court, mesmerized in a routine of different drills.

There are four players this semester: Summer Aguirre, Chihiro Nishijima, Eren Sugimoto and Brianna Wood. Alana Golderplays as well, but she comes as support, enrolled through the class, and does not play in the tournaments or other games.

Anda has been playing tennis nearly her entire life. She was a Chaparral High School graduate, and then came to Palomar to play. She trained under Coach Ronnie Mancao at the time, and learned a lot, improving to the point that she obtained a scholarship from Seattle University (SU) to play for them. After finishing her time at SU, she came back and finished her masters at San Diego State University.

It wasn’t really a career goal she was initially looking for—she knew in high school she wouldn’t be playing professionally, that it was just an enjoyable hobby. After obtaining the scholarship and improving, she came back to Palomar and was interested in coaching. She called Mancao and asked if there were any tennis positions open, and just the day before they had discussed the need for a new women’s tennis coach, and he told her to apply.

“It wasn’t necessarily a goal, it just happened that way, so I’m wanting to give that back: play a little bit and coach these girls so maybe they could apply themselves,” de Anda said.

“This year’s goal was just getting enough girls to play,” de Anda added, explaining that they had pulled their fourth girl last minute for this season. Chihiro Nishijima, who has only been playing tennis for three and a half years, played so well last year she competed in the Ojai Tennis Tournament where top players from northern and southern California come and competeannually. She graduated from Odawara high school, and is from Kanagawa, Japan.

Nishijima’s goal is to compete again at Ojai, this time going round 16 in doubles, and winning a two-game single, finally going to quarter finals.

“She made it to quarter finals in our regional tournament, and they did really well, her and her doubles partner,” de Anda said, adding that all of the girls have really good technique and stroke, and they know how the game works.

Next year’s goals: get bodies, get a full roster team. De Anda added that from there, she’ll build up the team.

Scott Cathcart, Director of Athletics, explained that since they pulled de Anda in late in the fall, it was hard to give her enough time to recruit. De Anda is in her first year at Palomar as head coach. For Cathcart, the program’s goals are to bring in those who love the sport and want to pursue finishing their degree, whether that be at Palomar or at a four year.

As the director, Cathcart wants to see the program grow, adding that as the players move forward in the season, he’d like to see “a positive athletic and academic experience, worthy of the intercollegiate title that is worn by our program in its’ entirety.”

For this year, it was hard going to the matches and knowing they were already going to lose by default since they didn’t have enough players, but the girls who did play, played well, and they improved a lot.

“It will be interesting to see who we get next year,” de Anda said. “If I get girls who have played before, or if I get new players who I have to coach from the ground up. As long as I get my sixthough, I’ll be okay.”

Erin Sugimoto is also on the team this year, and she has been playing for nearly 10 years, finishing high school at Showa Women’s University in Tokyo, Japan. Her goal this year is to go to Ojai.

Alana Golder, enrolled in the class, added that she personally would like to improve with strategy. She has also been playing for 10 years, and Anda wants to help each girl improve not just in their overall game, but in each of their goals.

When asked about what Anda would like to see for next year, she personally wants to see changes in how practices are run, and how ladder is run (a ranking system of how each player moves up and down in position)—but aside from team play, she would like to see some kind of hierarchy, so that the girls all know how to push each other.

“I would like to create solid practices next year, and once a week keep points of who moves up the ladder-number one, two and three, and at the end of each week have them compete for each spot,” she stated, adding, “I can only push players so far as they want to go when I’m running drills, but it’s really helpful when you have your own partner pushing each other to be better.”

De Anda’s love of the game can be reflected through her players, and through her interaction with the girls on the court.

“I’ve been playing tennis my whole life,” de Anda said, “I love it.”