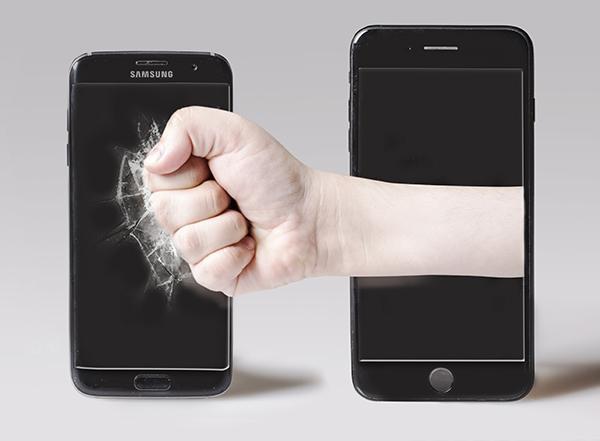 Samsung vs iPhone which is better? (Samsung)

Don’t waste your money on an overpriced pile of junk just because it looks aesthetically pleasing.

If you’re uncertain on which phone is better, it’s not even a contest, Samsung wins by a landslide due to its vast majority of better specifications, customization, and affordability. All iPhone has going for itself is that it arguably looks better.

Over the past years, Apples’ slogan seemed to be “less is better” which can be true in some cases, but when it comes to smartphones it isn’t.

One landslide victory Samsung has over iPhone is their phones random-access memory (RAM). RAM is used to keep apps running in background. For example, with enough RAM you could be in the middle of playing a game on your phone, then pause it and watch a Youtube video and then go back to the game without the game rebooting, which results in you not losing your progress on the game.

On top of this example, Apple is nearly 2 years behind Samsung when it comes to RAM. The Samsung Galaxy S7 came out almost 2 years ago and comes standard with the same amount of RAM as the iPhone X.

Not only are the base model specs better than iPhone, but they’re upgradable too. Many Samsung smartphones come standard with micro secure digital(SD) card slots which means their storage can be removed, replaced, and upgraded with higher tech and larger storage.

Along with its’ storage, its’ battery can be removed with a full one, replaced with fixed one, and upgraded with a larger one as well.

Finally, Samsung destroys iPhone in is its’ affordability.

iPhone has been routinely criticized for outrageously overpricing their products. iPhones top tier phone (the iPhone X) cost an astounding $1,000- $1,150. The current middle tier phone for samsung ranges from $300-$600 and has nearly the same specs as the iPhone X. With Samsung, you’re getting a phone with similar specs as Apple’s top tier phone at a third of the price.

Don’t buy a super expensive phone with no customization,and outdated specifications just because it looks more appealing. Make the smart decision and save money by buying a more to date and affordable phone from Samsung.