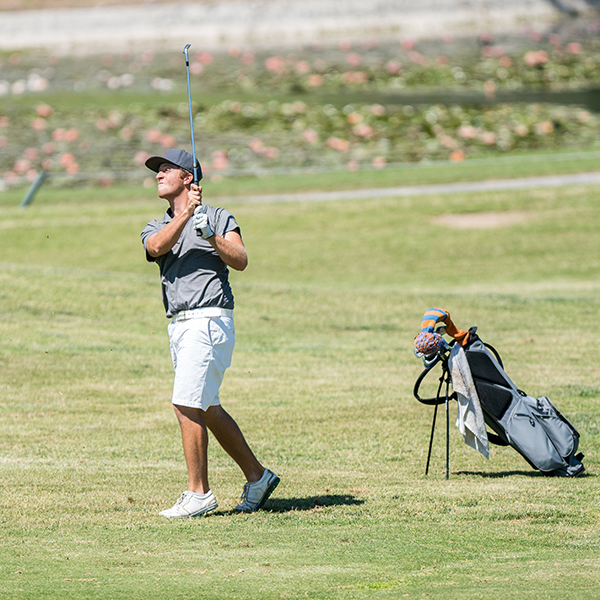 The Palomar men’s golf season may have ended, but for 22-year-old Mitch Cannon it was only the beginning of a new start.

Cannon was the only individual Comet golfer to advance to a statewide golf tournament hosted by the California Community College Athletic Association on May 8.

Cannon was accompanied by teammates Tyler Cress and Jaime Sanz at the Southern California Regional Finals at El Camino Country Club in Oceanside. Cannon was then able to qualify for the state tournament with a score of 75-74 –149.

“He’s competitive, always a battle when you go and play with him,” Cress described Cannon during practice before regionals.

Although Cannon likes to practice a little bit of everything before a tournament, he believes that putting is the most important.

“Everyone can hit the ball. Once you get on the green, that’s where it decides if you shoot a couple under or a couple over,” Cannon said.

Cannon starts his tournament days with the same breakfast, Jimmy Dean Delight sausage muffins— “the light ones, I don’t want all the calories,” he joked.

This was Cannon’s second year playing with the Comets. Cannon started playing with his brother Kelly Cannon three seasons ago, and the two made it to the Regional Finals as a team. That year however only his brother advanced to the state tournament.

Cannon would go on to take a three-year hiatus from golf in order to focus on work, before returning to the team this year.

Cannon believes that his time away from golf has allowed him to grow as a player.

“Back when I played my first season I was 18, I’ve gotten older and I now realize that if I hit a bad shot, you gotta let it go then try to salvage the hole,” Cannon said.

The state championship tournament was on May 15 at Cypress Ridge Golf Course in Arroyo Grande. Cannon competed hard but ultimately did not win the tournament, completing the day with a score of 82-84 – 166.

Despite the fact that Cannon did not win the tournament, Coach Mark Halda was proud of his top golfer.

“If you win, awesome, if you don’t win that’s still awesome because how cool is that you are one of 66 players in the entire state of California that gets to play in this championship,” Halda said.

While believing that he could have golfed better, Cannon acknowledged that making it to the state tournament was an achievement in itself.

“I didn’t play very well, so I wasn’t happy about my score, but it was cool to be a part of the State Championship,” Cannon said. “I’m just excited to get the chance to keep competing at the college level and set new goals and try and complete them.”

Next up for Cannon is a partial scholarship to Lyon College in Batesville, Arkansas, where Cannon will be able to continue his golfing career while pursuing a degree in Business Management.

When asked if he would like to continue playing after college, he responded with,

Cannon is unsure if golfing professionally is going to be in his future, but believes that he is doing his best with the opportunity Palomar has given him.

“Golf is one of those sports you can play throughout your whole life. It is hard to make it professional, but I might as well try while I still have it,” Cannon said.

Longterm, Cannon has his eyes set on another prize. After his first year at Lyon, he hopes to get an internship with his father’s friend and eventually become a stock broker, “I want to make a lot of money.”