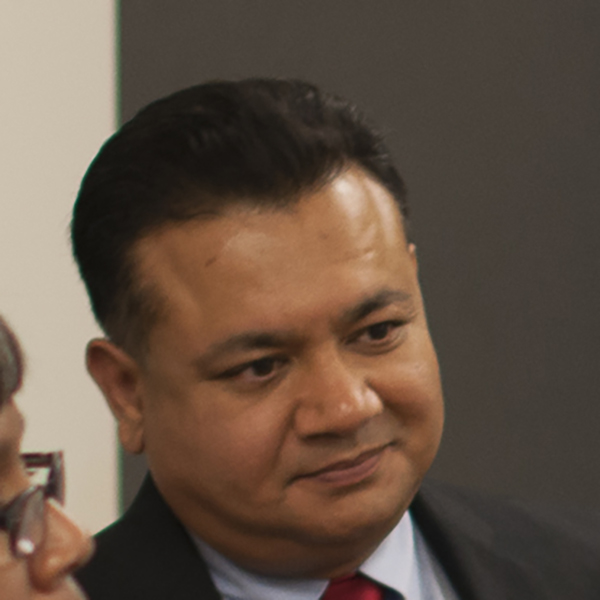 Hussain investigation is faced with scrutiny

The results of a district funded independent investigation into the conduct of Palomar Dean Syed Khaled Hussain was released, clearing him of all 18 allegations, but a number of faculty called the report biased.

Faculty testified against the report at the May 9 governing board meeting, and a previous coworker at a different school has mention similar problematic behavior. Hussain says he will be back but administrators say that no decision has been made.

Hussain has been involved in a controversy over his behavior since he was hired in August of 2016 as dean of the Arts Media Business and Computer Science division, resulting in a protest of around 100 faculty, staff, and students on March 14 in which they demanded the Palomar Governing Board fire Hussain.

Lily Glass, an associate professor who had filed a complaint with Human Resources over “unwanted hugging” from Dean Hussain, spoke in front of the governing board on May 9 to criticize the investigation.

“The report is biased, and based on false information,” Glass said in her emotional testimony. Addressing the issue of the unwanted hugging, Glass said, “During my interview with (the investigator) Mr. Gonzalez, I was not permitted to address the issue or speak to it…. It appears that Dean Hussain was allowed to speak regarding the matter, while I was not.”

Susan Snow, the union representative present during the interview between the investigator and Glass confirmed Glass’ claim that she was not allowed to speak about the incident and that the report shows that Hussain was allowed to give his version of events. According to Snow, the investigator stopped Glass when she began recounting the incidents, stating that the report from a previous Human Resources investigation, which took place in September was sufficient.

The investigation states that the hugging took place on two separate incidents. Glass’ account states that during the first hug, which took place after a meeting in front of 25-30 people, she became stiff. During the second hug, she stated that she again became stiff and tried to pull away.

Hussain’s account of the incident was that he initiated the first hug, which lasted for about two seconds, and that Glass initiated the second hug. On both occasions, Hussain stated that he smelled alcohol on her breath. Glass vehemently denied this in her governing board testimony, stating that Hussain lied in order to retaliate against her.

Shannon Leinhart, the Faculty Federation co-president, said that the outcome of the investigation was “predetermined” by the district. “I feel that the administration had a vested interest in protecting their own because administrators protect administrators,” Leinhart said in a phone interview. “[Hussain] dismissed the concerns that people were bringing to him so I was not surprised that their investigator determined that there was no wrongdoing on his part.”

She further stated that the account of the incident given by Hussain in the Human Resources investigation in September was different than the one given in the March investigation. “A really good investigator would’ve compared those two stories and said ‘wait a second… you changed your story,'” Leinhart said.

When contacted by The Telescope, staff from Human Resources stated that they could not comment on personnel issues.

In an official statement, Public Affairs director Laura Gropen stated, “College leadership followed appropriate administrative procedure, provided due process for all involved, and a thorough investigation was conducted. Upon review, the reported findings did not support the allegations. The individual is currently on paid administrative leave and there is no specific date for a return to duties.”

Hussain responded to The Telescope through text message, saying he was returning on the 12th without specifying which month. He did not respond to further inquiries, stating that it was up to President Joi Lin Blake if he could do an interview.

After speaking with the college’s legal council, Blake stated that “the report should speak for itself,” and that there was “no need for comment.”

Blake also stated that there was no confirmed date for Hussain’s return.

The independent investigator, Jose Gonzalez, stated that he could not comment on the investigation due to it being a personnel issue.

Not just at Palomar

Hussain has encountered issues regarding his behavior not just at Palomar, but also at previous places of employment. Tyler Williams, a 26-year-old graduate student, worked under Hussain as a student worker at Los Angeles Southwest Community College. Williams said she ultimately left the school because of Hussain’s conduct.

Williams came into contact with Leinhart after reading a San Diego Union-Tribune article about the March 14 protest, sending her a written letter detailing her experiences with Hussain.

“Dr. Hussain made a comment one day while I, an African-American female, and my colleague an African-American male were transitioning out of a meeting with him,” she wrote in the letter. “As I left the office he asked me, ‘Do you know what my son’s favorite food is right now?’ I responded with no, and he explained it was fried chicken and watermelon.”

In a phone interview, Williams said that Hussain’s management style was authoritative, and that he had issues with other women with whom he worked.

“He doesn’t really know when he’s crossed the line,” Williams said, adding that the issues with his behavior mostly involved women. She recalled that after complaining to the school’s human resources department, Hussain was required to go through sensitivity training, but that no further action was taken.

“He knows what to say to the right people to get what he wants,” Williams said, explaining that the school’s administrators did not have a problem with Hussain.