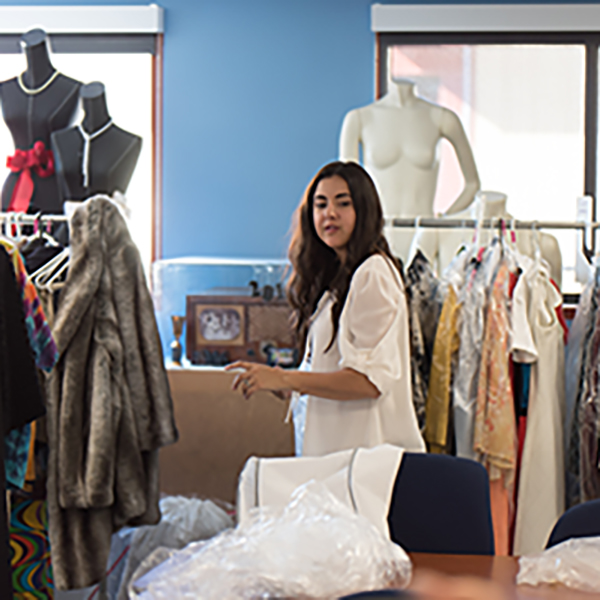 Behind the MODA runway

Palomar’s 70th Annual MODA fashion show was in six and a half hours, and whether I had previous experience or not, my goal was to be electric.

The fashion shows arena, The California Center for the Arts in Escondido was flooded with beautiful faces.

As mentioned above I have no previous modeling experience. I can barely take a selfie without some form of regret lurking in the shadows.

I’ve been in a couple of short films and live on live television, but the act of actually modeling my body was a foreign concept. In everyday life I would compare my walk to that of a sassy, yet clumsily adorable duck with swift city feet.

In the back of my mind I thought of the early 2000s Disney movie “Model Behavior.”

It follows the story of a young, shy girl with dreams to be a fashion designer who meets a a famous teenage model with looks identical to hers.

I didn’t meet another woman whose features astonishingly matched mine; However it did feel like I was being introduced to an alternate version of myself for the first time.

“70 Years of Style” was this year’s theme incorporating a timeline of looks from different decades, along with handcrafted, one-of-a-kind designs from students in Palomar’s fashion and merchandising program.

I fittingly was placed in the 1970’s, a time were fashion was notably about individuality, freedom, and identity.

In fact, Soul Train along with the Netflix original series “The Get Down” served as my primary inspiration.

The collective hum of the models, designers, stylists, and staff was exciting. Bodies of all lengths, widths and shades shuffled through the quarters designated for the evening’s festivities. People socialized, greeting old friends and making new ones.

The remainder of the afternoon was spent swapping between long intervals of waiting, and practicing our strides.

Each model was critiqued by a walking coach.

“Slow down.” “Speed up.” “Great energy.” Comments like this were commonly thrown out throughout this rehearsal.

In-between attempting to paint my toenails and not miss any cues given to me, the curious journalist in me began to read the room. There was so much vibrancy not only the clothes, but the people occupying them.

A deaf girl signing with her interpreter, full figured men and women sporting loud fabrics, scratch made streetwear styled to Kendrick’s new music, it was a delight to the senses.

Showtime came around. I kept the legacy of “Soul Train” in my platform heels as I pranced down the runway in true “soul train line” fashion.

It was a fashion show. That’s what I gave the crowd: a show. I surprisingly was confronted with an explosion of cheering.

I had the privilege of walking the runway again, this time dressed in the delicate, fiery, creations of Palomar’s fashion and merchandising department’s very own Nancy Warner. The rest of the models in her line as well as myself, dubbed ourselves “The Fire Nation”

“This line was about rediscovering who I am as a mother, as a woman, as a creator.” said Warner.

There was overall elation about the show from both the crowd and designers, including students who had a part in the process.

Cemaka Troy, a fashion major at Palomar, expressed his contentment with the outcome.

“I’m just so happy! Seeing a semester of handwork come together is so satisfying.” Troy said. “I’m excited about the selection of models, too. There’s a lot of brown sugar this year.”

The evening was filled with funk, friends, new experience, and amazing clothes. As Troy said, with a dash of “brown sugar,” a perfect recipe was cooked up for one hell of an anniversary.