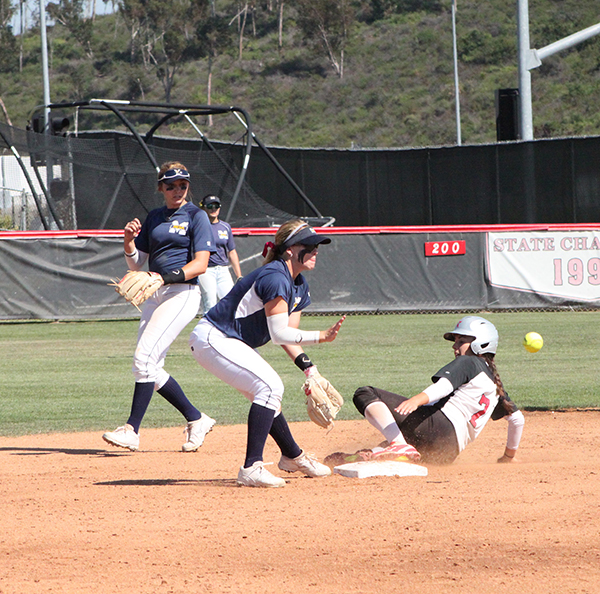 After finishing undefeated in their conference on their way to a 2016 state championship, there was nothing but high expectations for Palomar’s softball team this season.

The Comets went 16-0 in conference play again this year, and went into the postseason looking to repeat as state champions.

After battling through the third toughest schedule in California this season, the team was not discouraged by a 10-11 out of conference record, instead looking at it as a way to grow.

“We struggled a little in our non-conference this year, we want to compete against the best teams so we know how we can get better,” Head Coach Lacey Craft said.

Moriah Lopez, the Comets RBI leader with 45, believes that the team has grown a lot over the course of the season.

Crystal DesLauriers, the Comets 18-year-old primary starting pitcher, was filled with confidence about the upcoming playoffs.

“There’s not pressure, we’ve been coming together all season,” DesLauriers said. “We’re ready, we’ve been practicing hard all week and all season. We’re ready to take it to ’em.”

The postseason started on May 5, with Palomar battling against Pasadena City College in a best of three series.

In the first game Palomar edged out PCC 5-4 thanks to home runs from Lopez and Taylour Fa’asua.

In the second game DesLauriers battled through 10 innings, only giving up three runs in a game that went deep into extra innings.

The Comets Lexi Williams walk off bloop single sealed the game and the series for the Comets, who moved into the CCCAA Super Regionals, a double elimination tournament between eight teams.

Palomar battled hard in the Super Regionals, winning two games against Santiago Canyon College, before falling to the undefeated Cypress College 11-4 in an elimination game on May 14.

The Comets finish the season with an overall record of 30-13, and will look to improve next year on their goal of another state championship.