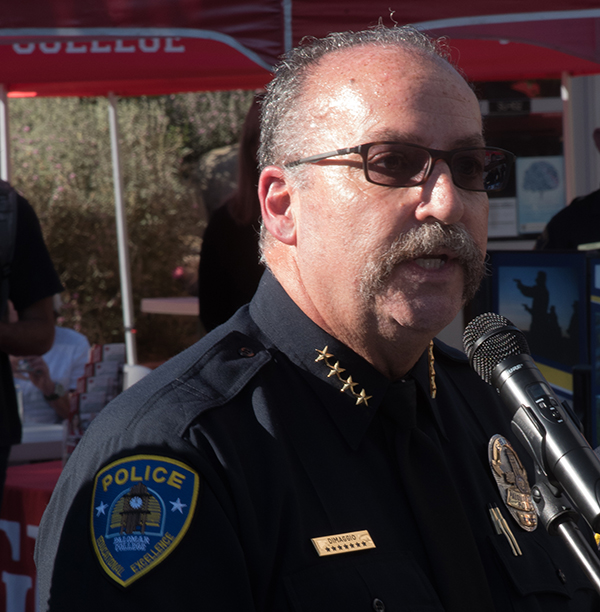 As he approaches his final farewell as Chief of Police here at Palomar College, Mark Dimaggio leaves behind a strong legacy of mentoring, motivation, and the importance of connecting with people on a human level.

Having been involved in law enforcement for the past 33 years, Dimaggio can draw from a variety of unique learning experiences to improve not only his current position as chief, but the positions of his team members in the department.

The chief even admits that has been the best part of his position at Palomar, teaching and working with his team.

His greatest enjoyment as chief has come from “taking care of your staff to be sure they have the proper tools to go out and do their job. Taking whatever has worked for me and passing it along. I love to mentor and develop people.”

This is a theme that has followed Dimaggio throughout his entire career.

When speaking of his time working at the police academy and also teaching college courses, what stood out most to the current Chief is seeing his students succeed.

“Some of my students now, that I used to teach back in the day, are chiefs now. That’s pretty cool. They come back to me and go, you know, what’s kind of cool is everything you taught me was absolutely spot on.”

His enjoyment for working with people to see them move on and become better truly transcends onto the outlook of his team at Palomar.

Jesus Montes has been at Palomar for 11 years and is the current lead community officer and admits that Dimaggio’s impact on the department has been huge.

“The engine was there [before Dimaggio], it was misfiring, now that he came on board, the pistons are all firing correctly.”

Chris Brown, a community service officer at Palomar for the past three years has experienced Dimaggio as his first chief of police to work under.

“He’s like a dad. He treats you like his son, gives you a little roughen up but at the end of the day, it’s a hug.”

Both Montes and Brown recalled upon some memorable catchphrases this dad-like chief has created.

Phrases like, “iiiiincredible!” “aahmazing!” “you’re out of control!” will be missed around the department after Dimaggio bids his final farewell in July.

As for what’s next, Dimaggio isn’t worried about there being a big shift between work life and a retired one.

“I’m a people person,” said the chief, “It’s going to be neat to go on travels and meet new people and interact with them and learn different cultures. That’s kind of what I’ve been doing my whole career.”

While the beloved chief is enthusiastically awaiting the beginning of a new adventure, his department will greatly miss his presence.

Sargent Chris Moore spoke of a somber meeting in which the chief informed the team of his upcoming departure.

“When he explained to everyone that he was leaving, several adults began to get teary eyed. You know, it was really emotional.”