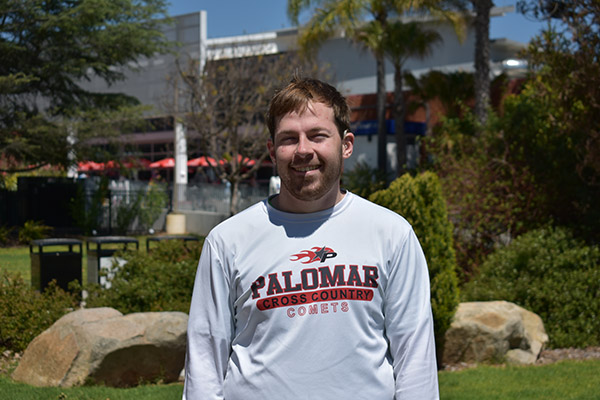 Inside the life of a deaf student

James Singler III, 21, is a deaf student who is currently enrolled at Palomar college and is hoping to eventually transfer to the deaf school, Gallaudet University, in Washington D.C.

Single deafness has not inhibited him from communicating and interacting with others from both the hearing and non-hearing communities. Growing up, Singler only attended regular public school because many of his friends were hearing. Singler became comfortable around non-deaf people, and became comfortable with speaking.

His friend Eric Chausow, who can hear, said that “When you talk to him you can tell that he’s very outgoing and naturally genuine.”

Singler and Chausow have been friends since their childhood. “We met back in middle school, in the 6th grade in a speech class … I was kinda shy and he came up to me and started talking,” said Chausow.

Singler is the only member of his family who’s completely deaf. The closest he has to another deaf family member is his sister Sarah, who can only hear out of her left ear.

“When my parents found out that I was deaf my mom immediately knew that ASL (American Sign Language) would be very useful because she took ASL at Palomar,” said Singler. His mother learned from Kevin McLellan, who has been teaching at Palomar for over 30 years.

Although Singler has been deaf for the greater part of his life, he hasn’t always been that way. “I was born hearing, and I started talking after I became deaf,” Singler said.

Singler’s mother, Tamara said that “when we finally found out we were at the children’s hospital and I remember being super upset and afraid, just realizing it was going to be harder for him.”

However, Singler has not let his deafness inhibit him from communicating and interacting with others from both the hearing and non-hearing communities. “When he got to know you, he would be very extroverted. He would communicate with you, he would bond with you just like any kid,” said Tamara

“I go to the mainstream schools because I want to hang out with people who I know, who are my friends,” said Singler.

Growing up Singler participated in multiple sports, including wrestling, baseball and basketball. Singler doesn’t see deafness as a disability. Singler says that he would not label himself or anybody deaf as a disabled person, he would just label them as deaf.

“Heck no,” he said, “I don’t know why people call it a disability … A disability makes you feel like you’re weak, so if you call yourself a disability person, then you label yourself as a weak person. So I don’t think deaf people are weak people, They can do [stuff] that a lot of hearing people can do.”

“[Palomar] has one of the best ASL programs in California, and the ASL lab is like a second home to me,” Singler said. After attending Gallaudet University, Singler hopes to earn his teaching credentials and come back to Palomar College as a professor, teaching ASL to students.