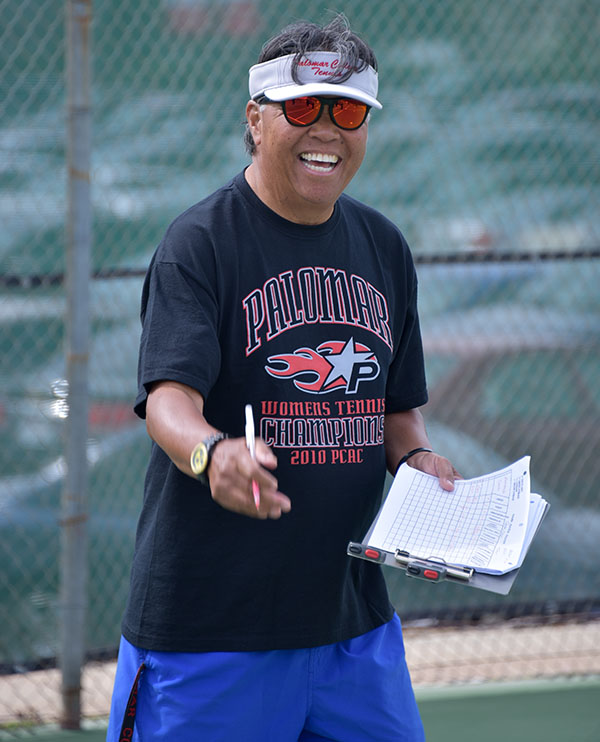 Mancao has coached tennis on the collegiate level for 32 years, of which he has spent 10 years at MiraCosta College and the last 22 at Palomar College.

Mancao has garnered a lot of respect from his players through his years of coaching, and players like sophomore Peter Trhac appreciate the insight their head coach brings.

“He’s seen it all, he’s coached professionally, I believe he’s played professionally, so I can appreciate that,” Trhac said. “Whenever he gives me insight that I don’t see while I’m playing a match definitely helps.”

Reaching 500 career wins does not come without hard work and high expectations, something which Mancao has always tried to instill in his players.

“He’s always pushing us to do better,” freshman Dean Vo said. “Even if he thinks that we’re working at 100 percent, he still thinks that we have so much more to achieve.”

Mancao’s players feel their coach brings a good balance of being laid back and fun, while also maintaining the respect and hard work ethic that he requires of them. Mancao runs a tight ship, and has a lot of strict rules which are to be followed at all times.

“As long as you follow the rules I think he’s a really fun person to play under, and I think it’s a good program,” Vo said.

The Men’s Tennis team has got off to a strong start this season, and Mancao believes this year’s team has all the tools to compete at a high level.

“I think right now we are in a good position,” Mancao said. “We have the potential, but we have to perform. Anything can happen from now until the end of the season.”

Mancao has enjoyed his time coaching, believing that coaching at this level has helped to keep him young, since he doesn’t play tennis himself as much anymore.

“I enjoy being with these young individuals,” Mancao said. “Where I can try to guide them and make a difference in their life, in competition and life skills, and that’s been very rewarding to me.”