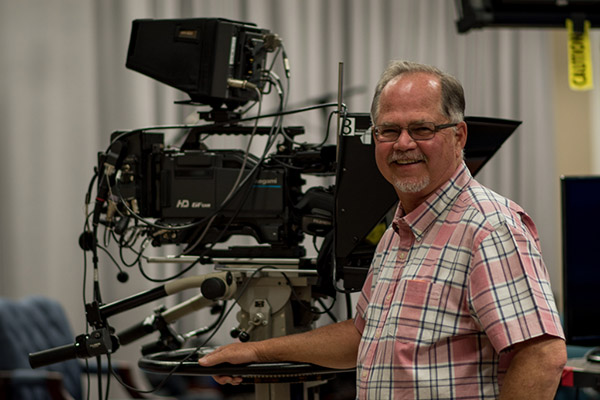 From Palomar College’s class of 1976, to 27 years in the professional broadcasting field, to 19 years teaching at Palomar College, Professor Pat Hahn has done it all in the Digital Broadcast Arts (DBA) field.

In the beginning of April, Professor Hahn submitted his retirement papers to the front office and recalled it as being “anti-climactic.”

“I just gave the paper to someone who I don’t know, she doesn’t know me, and she just tells me to have a nice day and that’s it,” Hahn said. “I hope I made a difference in hundreds of thousands of students… One thing I will miss is not only the past students, but all the future students I won’t get a chance to teach.”

Hahn has grown the DBA field from five telecommunications classes when he started his career here to currently 25 DBA classes which stretch from film, radio, writing, producing and editing. The college now has a radio station, KKSM on AM 1320, as well as three television shows broadcasted live on cable television. Palomar has purchased 25 computers for the DBA program, and now offers four degrees in DBA after only having one prior to Hahn’s hiring.

The immense growth within the DBA program has led to many awards for Hahn as well as the program as a whole. The program has brought home 58 Emmys since Hahn has taken over. KKSM has been awarded the best college radio station in the nation in three of the last five years. Hahn himself has won awards such as 2000’s Palomar College Alumni of the year and the 2003 President’s Recognition Award for outstanding teaching as well as several others.

Felicia Vasquez, 22, one of Hahn’s students who has taken radio and television classes at Palomar credits Professor Hahn with the help he brings to the program. Vasquez explains, “Pat is different because he offers real world advice from the industry and is willing to offer advice and constructive criticism.”

A 2007 Palomar alumnus and current Channel 4 NBCLA reporter, Marin Austin credits Professor Hahn with his help in guiding her towards her career. “Pat always too the time outside of class to work with me… I could ask him to meet me at any time of the day and he would always be there to help me.”

Professor Hahn has worked in local and national radio, as well as local and national television. He has created several feature documentaries, and with his spare time in retirement he is looking to begin work on his first feature film.

Along with that Professor Hahn figures he will find his way into helping coach and consult television news reporters and also mentioned that he is sure he will be teaching somewhere.

“There’s going to be a huge hole in the department and it’s going to be very tough to fill,” fellow professor Zeb Navarro said, “Pat has just been an encyclopedia of knowledge on many aspects of broadcasting.”

During my time with Professor Hahn, he mentioned that this interview was the first time the idea of actually being retired in a month hit him.

With retirement, Hahn is looking forward to taking a break. He is cherishing every moment he is spending in his remaining classes, reminiscing on the fact that “this is going to be the last time I give this test…the last time I show this movie.”