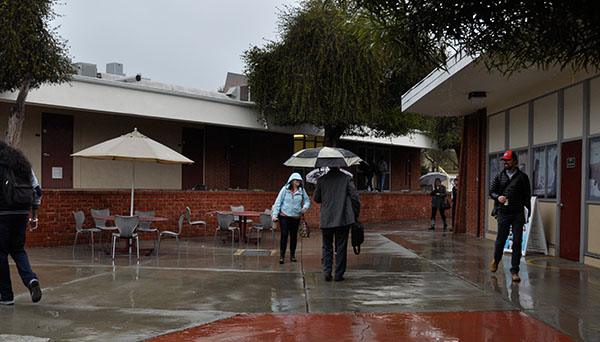 Less than two percent of California is in a state of severe drought conditions, according to the U.S. Drought Monitor.

During this time last year, more than 75 percent of our state found itself in that same category. An abundance of storms this past winter, making it now the second-wettest winter on record, helped fill our reservoirs past capacity and has the Sierra Nevada snowpack at 160 percent above normal for this time of year.

The San Diego County Water Authority (SDWCA) declared in March that “drought conditions no longer exist within the county.”

Earlier this month Gov. Jerry Brown lifted the drought emergency for all of California except for the central counties of Fresno, Kings, Tulare and Tuolumne where they are still under moderate drought conditions.

The drought emergency was declared in 2014, a time where conditions were at their absolute worst, with its key goal being water conservation. Brown had asked all Californians to reduce water consumption by 20 percent. This included trying to limit showers to five minutes or less and water plants only once or twice a week.

Tony Rangel, supervisor of the ground services area for Palomar College, said that the school has done its part in dealing with the drought by implementing certain water conservation methods.

“We’re harnessing rain water, we have wells on campus and we’ve cut back significantly on our domestic use. We cut back more than we were asked to,” Rangel said.

Even though we are no longer in a drought, Brown stated that “the next drought could be right around the corner, which is why conservation must remain a way of life.” It’s a sentiment Rangel agreed with.

“We as a society and a culture need to continue to conserve the way that we have been because if we don’t we’re going to find ourselves in the same situation or worse moving forward,” Rangel said.

However, despite all of the negativeness associated with a drought, our six-year long drought did manage to bring about some good.

The Palomar College Television (PCTV) department took advantage of this historic drought by using the past three years to create a documentary about it.

The film is an offshoot of their 2015 Emmy Award winning documentary “Breaking Point.” That film chronicled the shrinking Salton Sea, due to the drought and a lack of water management in California and the disaster surrounding the issue.

“Shadow of Drought: Southern California’s Looming Water Crisis,” set to debut this summer, is a documentary that will cover all the topics that surround the drought, including its impacts and solutions.

“We documented this drought, the most severe drought in California’s history and we show the historical significance of what happened and [we also talk about how] unfortunately the severity of what just occurred may get worse in the future due to climate change,” Bill Wisneski, the film’s producer, said.

Like Rangel, Wisneski stated that just because the drought is over, it doesn’t mean that the problems associated with it are gone as well and that our state can go back to its water wasting ways.

“It may end up being the wettest winter on record but it’s only a temporary fix,” Wisneski said. “The ramifications of having a five-year drought are long-lasting.”

California’s groundwater has been overpumped to a level that has never been seen before; as a result, it will now take many years before the aquifer is full again, according to Wisneski.

There is also the possibility of another drought, one that could be even more severe than what we just went through because of certain factors like overpopulation and climate change. As Wisneski put it, “demand is increasing and supply is decreasing.”