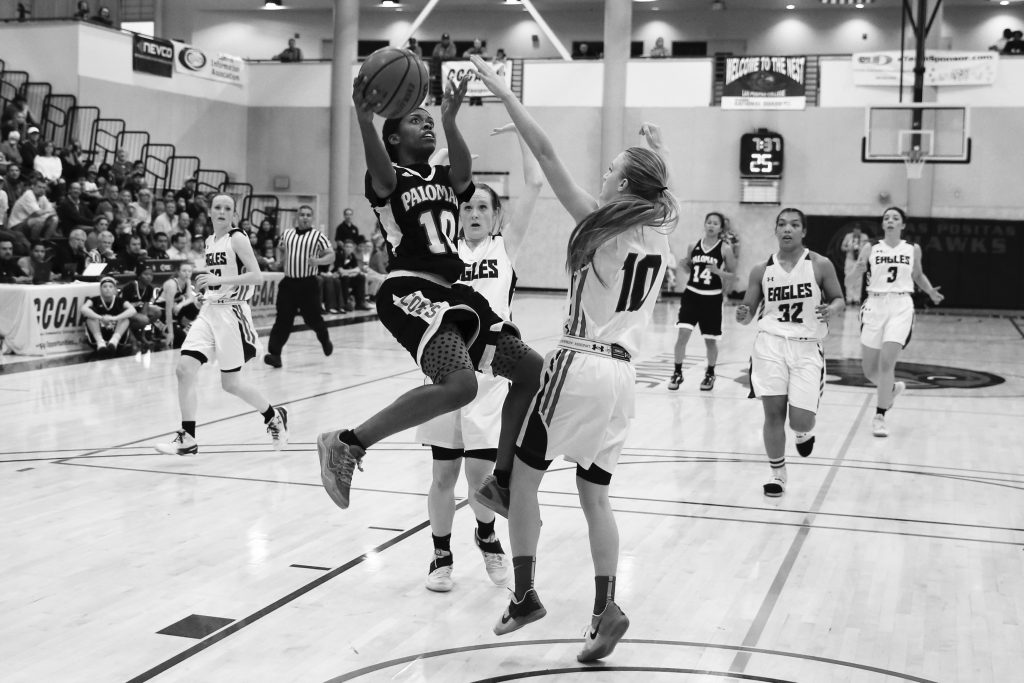 The Palomar women’s basketball team saw its record-breaking season come to a close March 11, after falling to College of the Siskiyous by a score of 73-51 in the state championship semifinals.

After finishing the regular season with a record of 25-2, the Comets earned a spot in the California Community College Athletic Association State Championship Tournament in Livermore, Calif. after defeating Orange Coast and Cypress College in the Southern California Regional Tournament.

The Comets played in the state championship for the second time in three seasons, this time becoming the first community college team from San Diego County to ever reach the final four.

“We had another great year,” Palomar Head Coach Leigh Marshall said. “Our goal every year is try to win a state championship, and we’re getting closer and closer.”

In the state quarterfinals the Comets defeated the Number 1 seed from Northern California the College of the Sequoias by a score of 74-70, which allowed them to make history by advancing to the state semifinals.

“Two years ago we were the first San Diego junior college women’s team to ever make it to the elite eight, obviously we did that again this year and then went one step further,” Marshall said.

In their semifinal match against College of the Siskiyous, the Comets had trouble finding the net and dug themselves into an early hole after shooting only 1 for 17 in the first quarter. This was uncharacteristic for a team that shot a field goal average of 41.5 percent over the course of the season.

“Our team just wasn’t itself,” Palomar College Athletic Director Scott Cathcart said, who attended the game. “We could not score from the perimeter like we had throughout the season, and it just wasn’t going to be our day.”

The Comets were able to cut the deficit to seven points at the half, and got to within three points in the third quarter before ultimately falling behind for good. The loss meant the end of the season for Palomar, as well as their college record 20-game winning streak.

While acknowledging the importance of becoming the most successful team in Palomar history, it was still a tough end to the season for Comets sophomore guard Ariana Hernandez; who lead the team scoring 22 points in the semifinal loss.

“People may say that we had a really good season because we made it the farthest San Diego County has ever made it… but for us we know that we could have made it all the way,” Hernandez said.

Hernandez, who was named to the All-State Tournament team, gave all the credit to her teammates.

“It wasn’t me honestly, yes I had my share of points, but I didn’t do it on my own,” Hernandez said. “I got All-State from my teammates, and then I got it from my coach believing that I can take those shots and playing me those minutes.”

With their season wrapped up the Comets now look to the future after a year in which they left their mark in the college record book.

“We made history,” sophomore guard Allie Israel said. “I know in the end we’ll be proud of that.”