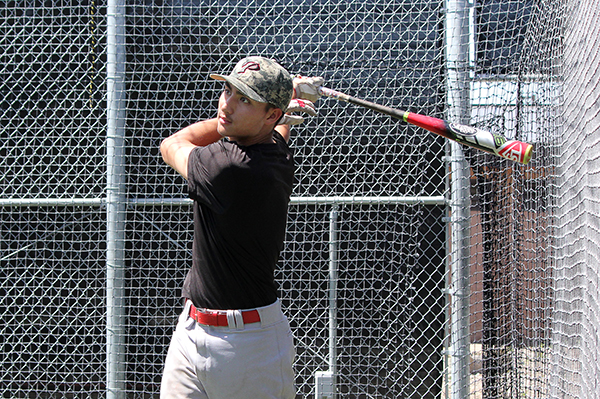 Comets slugger cleans up the path to home plate

Comets designated hitter and pitcher Cameron Haskell is looking at a long career ahead of him.

A former NCAA Division 1 athlete at University of Riverside, Haskell transitioned to Palomar this off season in order to get an extra year of playing time, helping to develop him into a more complete player.

Currently, Haskell is second in the Pacific Coast Conference in home runs with six, and runs batted in with 35.

Haskell started his Palomar career off strong during the Comets home opener against Golden West College on Jan. 28., launching a walk-off home run during the bottom of the 9th inning of the game.

“It was crazy,” Haskell said, “when I was rounding third base I just see all my teammates waiting for me at home plate. It was like a Nike Commercial.”

A walk-off home run while trailing during the ninth inning is a magic moment, yet it appears Haskell might just have the magic touch. Haskell claims he has no special technique when it comes to being a multiple home run hitter.

“Home runs are one of those things where if you think about hitting one, you won’t,” Haskell said. “Every single home run I’ve hit this year has been accidental.”

Haskell stays humble despite his accomplishments; a .348 batting average, a scholarship to NCAA D-1 school University of Arizona, and in home visits from Major League Baseball’s Atlanta Braves.

Haskell says he never sleeps on anything, telling himself that playing good at one game doesn’t mean he will play good at the next; a mindset that was developed from his humble beginnings in the sport.

“I wasn’t the best player out of high school, I wasn’t seeing scouts in my first year (at UCR), so for this to be happening now…it’s pretty exciting,” Haskell said.

Comet’s head coach Buck Taylor can attest to this modesty in Haskell, claiming that the hitters best trait is being a good teammate.

“He acts like everyone else. He plays the game right. He doesn’t think he’s big time,” Taylor said.

Teammates Cody Norton and Conor McKenna both agree, with Norton describing Haskell as “naturally gifted,” while McKenna spoke of his “god given ability,” to play ball.

Other teammates, like sophomore outfielder Jordan Gardner, acknowledge that Haskell is the hitter you want to see at the plate if you’re on base.

“Whenever there’s runners on in front of him they score no matter what,” Gardner said.

While he is seen as an asset to the team, Haskell makes sure to give credit to his teammates for his own progress as well.

“I have a really good group of teammates. It’s a comfort thing. We all play really loose,” Haskell said.

Haskell has gained notable recognition for his talent on the field, but is just as well known for cracking jokes and showing off his dance moves. He’s a friend of the team, and, according to McKenna, “one of those guys that’ll get your back no matter what.”