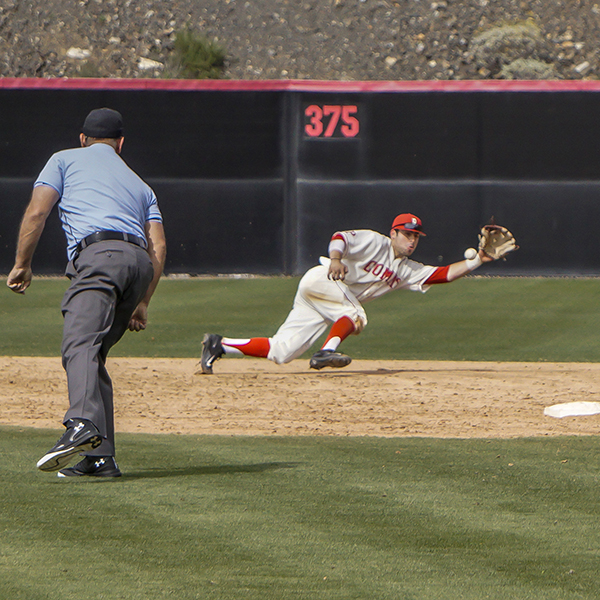 Palomar came into the game looking for a series sweep of the Eagles, after winning the first two games at MSJC by scores of 14-6 and 12-0. Their bats stayed hot in the finale, and the Comets came away with a 11-1 victory.

Baseball Head Coach Buck Taylor was pleased with his team’s effort in a game that saw the Comets struggle early offensively, before picking it up in the later innings to cement the victory.

“It wasn’t pretty today, but we kind of waited it out and our bullpen kept us in there and gave us an opportunity to win late,” Taylor said.

The Comets got off to a fast start in the bottom of the first inning, scoring the first run of the game on a RBI (runs batted in) single by sophomore first baseman Grant Buck, which brought home outfielder Jordan Gardner from third base.

Both offenses stalled after the first inning run, with Comets starting pitcher Nate Stilinovich keeping the Eagles offense grounded early. Mt. San Jacinto tied the game at one in the fourth, on a solo home run from third baseman Anthony Garcia that started the frame. The Eagles threatened to add another run, but stranded a man on third base when Stilinovich got catcher Armando Andrade to flyout to left field to end the inning.

The Eagles were shut out again in the fifth, which featured a running, over the shoulder catch at the wall by Comets sophomore outfielder Joey Cooper. The Comets were unable to get anything going in their half of the fifth, sending the game to the sixth inning tied 1-1.

In the sixth, Palomar was able to break through for what would be the game-winning run, on an RBI single by University of Arizona-bound, designated-hitter Cameron Haskell. The single brought home Cooper, who had gotten on base after being hit by a pitch thrown by Eagles starting pitcher Kaycee Garcia.

The Eagles attempt to mount a two out rally against Palomar relief pitcher and eventual game winner Kevin Palm was then stymied in the seventh, after a diving grab and flip to second by Comets shortstop Jared Montoya preserved the lead and ended the inning.

“It was a super close game still and they needed me to make a play so I saw the ball and made the play,” Montoya said after the game.

The Comets proceeded to break the game wide open in their half of the seventh, an inning which featured two pitching changes and seven runs scored before a single out was made.

Garcia, who had held the Comets largely in check for most of the afternoon, was chased from the game after a bases loaded double by center fielder Cody Norton cleared the bases and gave Palomar a 5-1 lead. Michael Gomez came on in relief for the Eagles, and gave up two walks while throwing four passed balls, scoring Norton and putting Palomar back in striking position with Haskell coming to the plate.

MSJC’s Luke Reinert came in as a new pitcher for the Eagles to face Haskell, who launched a towering 3-run-home run to right on the second pitch he saw from the freshman lefty, pushing the Comets lead to 9-1.

“It was a 2-0 count, new pitcher came in, fastball high comes up … disappointed I fouled it off… but same exact pitch came again and I just tried not to miss it, put a good swing on it,” Haskell said after the game about the home run, his fourth on the year.

The Comets scored runs 10 and 11 in the bottom of the eighth on a sacrifice fly by Norton, and an RBI single from pinch hitter Austin Salcedo that scored Carl Schwettmann from third for the games final run.

Jonathon Vizcaino came on in relief for the Comets in the eighth, striking out two of three batters. In the ninth, Palomar brought in freshman pitcher George Chapman, who set the Eagles down in order to end the game and complete the victory for the home team.

After the game, Coach Taylor said he was happy with his team’s resiliency and ability to get it going after a slow start.

“I love how we hung in there and our bullpen kept it close, but offensively we just have to be better early,” Taylor said.

The win improves the Comets overall record on the season to 11-5, with an undefeated conference record of 3-0, while the loss drops MSJC to an overall record of 3-14. The Comets next home game will be on March 16, when they will take on the San Diego City College Knights.