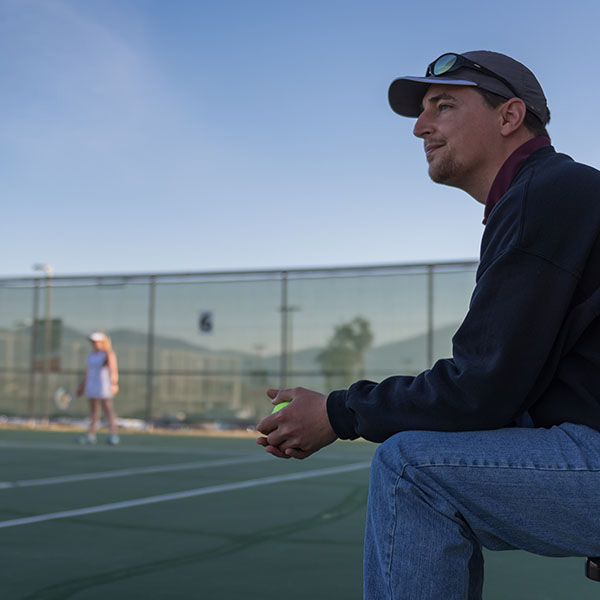 Women’s tennis has a new vision

Cristopher Tissot has been hired to develop the Palomar women’s tennis team into a solid competitor this season. Tissot is a graduate of Azusa Pacific University with a master’s degree in physical education. He is also certified as a strength and conditioning specialist. Tissot played college tennis at Glendale, and later became the assistant coach for seven years.

Scott Cathcart, director of athletics, explains that after deciding to bring back the women’s tennis team, they began to advertise for a head coach. According to Cathcart, Tissot’s enthusiasm to bring the program back to health was an element that stood out in the new head coach.

“We are very pleased to have Chris Tissot as our new women’s tennis coach,” Cathcart said. “He is very enthusiastic and committed to the program, and (has) just done an outstanding job.”

Tissot works with the women on a focused routine training schedule, preferring to start his players off with some basic stretching, a short warm up, and working on their spin before moving on into a specific type of drill for the day.

Tissot believes that match play is the best training the players can get, and that practicing matches and competition is what prepares the players for the games.

“It doesn’t matter how much you practice if you can’t do that in a match, it means nothing” said Tissot.

Nicole Burns, 18, has been playing tennis for over three years and is happy to have a women’s tennis coach this season.

“He is nice,” Burns said, adding that she hopes to grow as a tennis player, “get more experience, and learn techniques.”

Overall, Tissot is excited to work with this group of women. Tissot feels they are a solid team, and believes that Palomar is looking forward to a great season.

“I think we definitely have a possibility as a contender,” Tissot said.

Tissot acknowledged that being a coach is more than just teaching the players tennis.

“That is what is so exciting about being a coach, that you really have such a strong impact on peoples lives,” Tissot said.