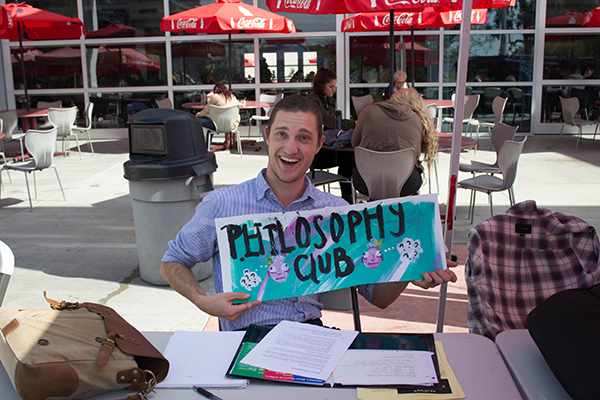 On Feb. 14-15, clubs set up rows of red tented booths in front of the SU Quad to promote their interests in technology, world affairs and community involvement. Club Rush takes place once a semester to spread awareness about club activities and help recruit new members at Palomar College.

However, turnout for the event wasn’t as great as some might have hoped.

“Low turnout is from a combination of a few things,” Tech Club President Michael Nagtalon said. “People’s classes coincide with schedules, and sometimes club turnouts are low because there’s an issue with communication amongst members.”

The Tech Club, Philosophical Outsiders, International Students Club and Circle K were among some of the clubs present at the event.

Marilyn Lunde, a staff assistant at the Student Affairs office, has worked at Palomar for more than 30 years and has seen clubs change through the years. She said that as the times change, so do students’ interests and activities; but the benefits of participating in a club will always be there.

“Clubs create an atmosphere of belonging and school spirit, and they bring a sense of pride here,” Lunde said. “It gives you more than having your nose in a book and going to a class.”

Flower Alvarez, a research assistant from California State University, San Marcos, was on campus to promote MEChA, the Movimiento Estudiantil Chicano de Aztlan or “Chicano Student Movement of Aztlan.” The club’s goal is to give back to the community by tutoring youth and to promote the importance of higher education.

“One thing that MEChA does is put what you learn in class into practice,” Alvarez said. “So for students who want to be change agents in the community, this is the organization they need to look out for.”

Other clubs on campus are more about enjoying recreational activities with fellow students. Dylan Luttrell, secretary of the International Student Club, said their club is more casual than others on campus and that their purpose is about making friends.

“We go to parties, the movies, bowling, that sort of thing,” Lutrell said. “You get to talk to people from around the world and get their perspective. We’ve had members from China, Japan, South America, all different places.”

Lunde said that a community college allows students the opportunity to explore interests beyond their education plan, and joining a club may lead to discovering a future career.

“Clubs can also help out with employment,” Lunde said. “You can make great social contacts and believe it or not, a couple of people went to a club and did so well that they went on to start their own business.”

To learn more about what clubs are active this semester or how to start your own, visit the Student Affairs page at palomar.edu. For more information contact Marilyn Lunde at (760) 744-1150 ext. 2595.