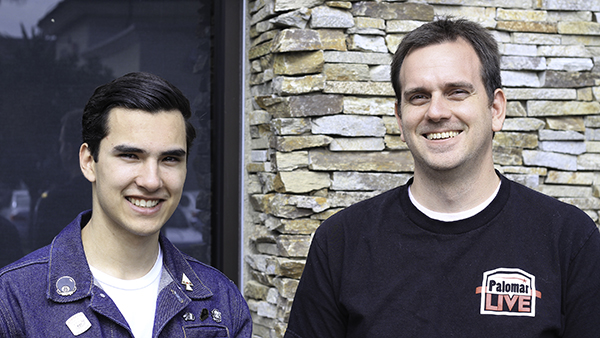 Abel Garcia and David Michaels won first and third place respectively for their work in the Palomar Live morning television show at the Broadcast Education Association Festival. The Palomar Live show, which is part of the Advanced Digital Production class, is entirely produced and ran by students.

Palomar Live is shot as a morning talk show with featured guests. Garcia won top honors for producing a veterans-themed show in honor of Veterans Day.

As the producer, Garcia was in charge of all the content that went into the show. This included writing the script, finding the guests to feature, and deciding what stories got covered during the segment.

“It was really unexpected and it’s an outstanding award,” Garcia said. “Knowing that my show won national, that’s something that I can have on my portfolio to show when I transfer or when I apply for a job.”

Michaels also produced a show that won third. His show focused on feel-good stories such as a charity that connects horses with people who are disabled for physical therapy.

“It feels a little weird just having my name [on the award], because, yeah I produced it but it was a group effort,” Michaels said.

Serena Reid, the class advisor, said she was just as proud of her students accomplishments and for receiving this recognition.

She noted that while Michaels volunteered to do the show, Garcia was more nervous, being that it was his first time producing the show. Their efforts paid off and both students were honored by BEA for their excellence in media arts.

“It’s humbling because you try to give them your knowledge based on the skills you have,” Reid said.

BEA was established in 1955 with a mission to educate college students entering the radio and broadcasting markets, and making sure they are prepared in entering the field. Palomar Live is produced in the fall and is aired through Time Warner Cable and Cox cable and reaches roughly 250,000 homes in the North County market.

Currently, Garcia hopes to transfer into Northridge College this fall and go into television or film production after graduating, while Michaels plans on moving to Los Angeles in March of this year to pursue his production career on a professional level.