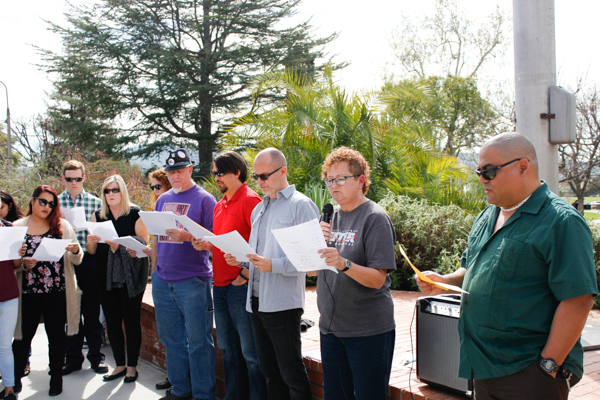 Students and faculty gathered in the SU Quad to support Palomar students whose education may be threatened.

The event was attended by 15 faculty, the students of a class taught by one of those faculty and several other students. Abbie Cory, English professor and co-director of the pride center, led the event.

“We felt, given the current political climate, that we really needed to speak out against what many progressives see as threats to our very democracy,” Cory said during her speech. “We’ve seen attacks on free speech, an independent judiciary, an independent press… those things are the very pillars of our democracy and we’re really concerned about that.”

The code was written after the election of President Donald Trump last November by Rachel Barney, a professor of Philosophy and Classics at the University of Toronto, and has been spread to many U.S. universities via social media.

Participating faculty and students read the 10 points aloud in unison, and individual faculty members spoke about other initiatives to support students who may feel threatened.

Student reactions to the event were varied. Luis Camacho, a 19-year-old student studying psychology said, “I think it’s really important to do this for the students who feel oppressed by the administration.” He added, “I personally believe it’s a good thing especially for undocumented students who want a degree.”

The demonstration was part of a larger effort by many faculty to make sure students feel safe in the face of the new Trump administration, which some feel may pose a threat to the rights and liberties of students based on their ethnicity, sexual orientation, or religious background.

In an interview after the event, Japtok said that his German heritage has made him sensitive to climates of political intimidation.

“I must say that as a German I feel a personal responsibility to be involved in these actions,” Japtok said. “Don’t misunderstand me, I’m not likening this to an impending Nazi takeover of the sort, but these things are complicated. The spirit of authoritarianism, once it’s afoot, is difficult to stop, so it’s important to speak out against it early and loud.”

After discovering the Anti-Authoritarian Code of Conduct while browsing Facebook after the election, Cory brought it to the attention of some other professors on her office floor, including Japtok, Joseph Limer, associate professor of political science, and Travis Ritt, professor of history and Faculty Senate president.

While discussing the code, the idea eventually came up to send an email to other faculty, inviting them to join in a public recitation of the 10 points.

Ritt said that the recitation is a response to more than just Donald Trump.

“That was kinda the final push, but overall there is a lot of nastiness being spouted not just in the U.S but all around the world right now,” Ritt said. “We feel it has no place here at Palomar or in academia in general. We want this to be an inclusive and open place where people can have a difference of opinion, but to do so in a respectful manner.”

Not all of Palomar’s faculty stood behind the action. Professor Michael Reedy, a mathematics adjunct, expressed his dissent for the idea in the email chain sent between faculty before the event, likening it to a Maoist communal recitation.

About the 10 points themselves, he wrote, “This screed, this fine exemplar of some sort of virtue signaling, is a manifest insult to adults possessed of what can only be referred to as a developed sense of reasoning.”

Reedy was not available for an in person interview, but did respond to questions over email. When asked what about the event he didn’t agree with he wrote, “I disagree with any mass proclamations conceived and explicated from tacit and buried (knowingly or otherwise) assumptions, assumptions about which those called to rally were never offered comment.”

Reedy also stated he was not alone in his dissent. “I’ve gotten many emails in support of my non-support of the ‘recital.’ Some expressing the onerous, oppressive, and sophomoric nature of it.”

Japtok stated that many of these responses said that politics didn’t belong in the classroom.

When asked about Reedy’s response to the email chain, along with other responses criticizing the event, Ritt said, “It seems they didn’t get the point.”

“You’re absolutely okay to have that opinion, but show it in a respectful way not through name-calling, belittling others because they don’t agree with your point of view,” Ritt added.

The code of conduct was signed by 58 faculty members, and is now posted in front of Abbie Cory’s office, MD 366. There are currently plans underway to post it in a more visible location.