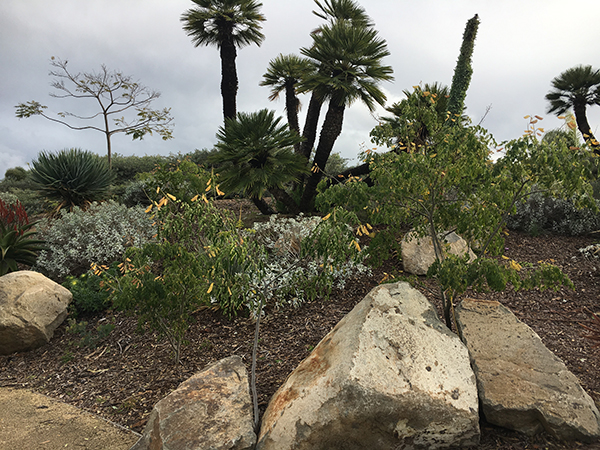 Palomar College doesn’t just have an arboretum, it is one.

The wide variety of plants and themed gardens that breathe life and character into the 200-acre campus caught the eye of the ArbNet Arboretum Accreditation program. Over the winter break, ArbNet certified the entire campus as a level II arboretum, making it the only community college campus in the state named an arboretum, sharing the distinction only with University of California, Davis.

“The fact that the entire campus is recognized as an arboretum… is very exciting,” said President Joi Lin Blake. “This is a notable distinction that places Palomar as a leader in the county.”

According to the ArbNet website, a level II arboretum is a collection of trees or woody plants with a minimum number of 100 labeled species, a plant database and a plant collection plan along with other requirements.

Grounds Department Supervisor, and self-proclaimed plant nerd, Tony Rangel describes an arboretum as a “living museum,” and said that Palomar has arguably been an arboretum for many years.

“There are… some plants on this campus that most other big name botanical institutions in southern California don’t have,” said Rangel.

According to Rangel, the labeled plants and gardens around Palomar contribute to the educational nature of the campus.

“I see students all the time, and faculty and visitors as well, stopping to read a label and pull out their phone,” Rangel said. “You can tell what they’re doing; they’re researching, and to me, that’s why we do it.”

Austin Barr, a 24-year-old post-graduate student, visited the campus for the first time and made note of the campus greenery remarking, “It’s good what they’ve done here… It’s not just the buildings, which is nice.”

Over the years, the grounds department has added a variety of themed gardens to the campus. One of the most notable is the Cactus & Succulents garden at the Comet Circle entrance to the campus. Established in 1964 by the Cactus and Succulents Society, it was the first themed garden on campus, and was one of the original inspirations to create more botanical collections at Palomar, including the Edwin and Frances Hunter Arboretum.

“What the supervisors before myself, and myself have tried to do since then is try to continue what the Cactus and Succulent Society did and add unique collections of plants for both aesthetics and education,” said Rangel.

Notable examples of these collections include the butterfly garden alongside the Natural Science building, and the newly completed Polynesian garden surrounding the Teaching and Learning Center, which includes a lava rock water feature and some endangered species, which can be identified by their red label.

Rangel seemed excited about the future, as he said that the accreditation from ArbNet may be a stepping stone for future projects.

“A lot of the plant material that’s here in the nursery is from Madagascar,” he said motioning to the surrounding plants populating the plant nursery we were standing in.

These plants are going to become a part of a Madagascar-themed garden to be set around the future Sports Complex on the north side of campus near Borden road. “It’s quite a few years away still … but to me that’s probably gonna be the most interesting in terms of all the different morphologies that plants can take on.”

Other plans include a garden with South American, Australian, and California native plants surrounding the new Library/Learning Resource Center and parking structure currently under construction, as well as a new plant nursery and a possible outdoor classroom in the Arboretum.

A walking tour of the various gardens around campus will be hosted by Arboretum Committee President Tony Rangel on Feb. 18. The tour group will meet at 10 a.m in front of the Teaching and Learning Center. To reserve a spot contact Tony Rangel at arangel@palomar.edu or call: (760) 744-1150 ext. 2133