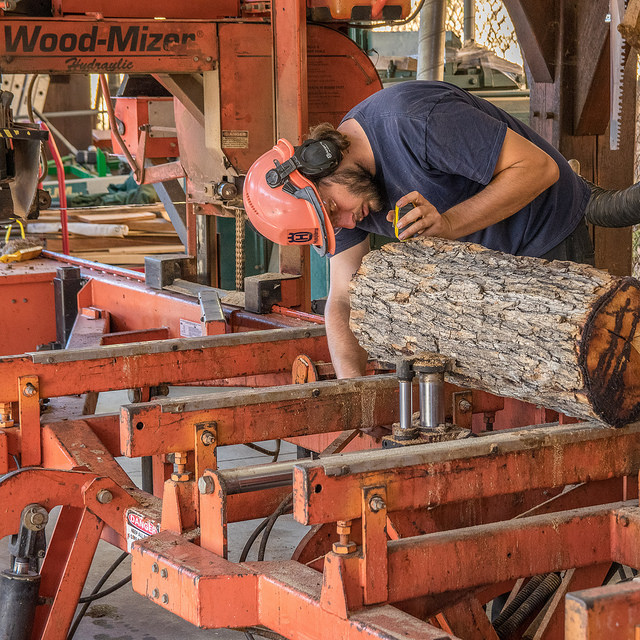 The sawmill that provided for Palomar’s Urban lumber program was set to be demolished until College President Joi Lin Blake intervened.

Dan Tresko, a Palomar student and teacher’s assistant for the program, explained that the sawmill is set to move uphill from its current location and be replaced by storage instead of the early plans for its demotion thanks to money set aside by President Blake.

“The president has set aside funds to move it,” Tresko said. “So they’re committed to seeing our urban lumber program continue.”

The survival of the sawmill behooves the urban lumber program for its opportunities to further the artistic needs students have in the program.

“We take trees from the urban environment, landscapes, parks that would normally go in the landfill and we turn them into lumber for the students’ use,” Tresko said.

The process in which Tresko describes is called carbon sequestration. He adds that these materials would then be turned into creative byproducts such as furniture and musical instruments.

Tresko explained that the program was originally set to be shut down by the college in 2014, but the motion was then changed when students initiated a letter-writing campaign and got the community involved to preserve the program.

There were questions raised whether the structure of the sawmill was earthquake reliant. Tresko said that there has been engineering done to it to qualm earthquake concerns.

“This construction is the same as what they used in barns back east,” Tresko said of the structure that houses the sawmill. “It’s called timber frame and those barns have been up for hundreds of years, and now they’re taking some of those barns down and reusing the lumber.”

Due to the sawmill being set in that location for a long period of time, Tresko raised up a question asking,”Our big question is, why spend a million dollars to move it up the hill? When they could build the storage up the hill?”

Vice President of Instruction Dan Sourbeer responded that college officials decided to relocate the sawmill due to its current location being a more efficient and convenient location for storage. Sourbeer added that the site was a perfect spot for machinery used for the college’s technological programs, where lumber could be transported easier with the use of vehicles than with the current set up.