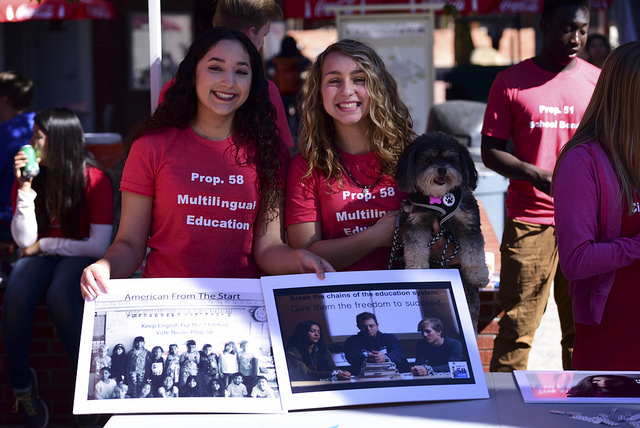 Proposition 58 was widely supported among voters, earning 70 percent of the vote.

With the passing of Prop. 58, this means public schools can more easily decide how to teach English learners; whether that be in programs like English-only, bilingual or other options.

This also repeals the “English in Public Schools Initiative,” an almost-20-year-old law that had required California public schools to teach “Limited English Proficient” students in special classes that were taught nearly all in English.

Support was strong among teachers, parents, school principals, Gov. Jerry Brown and organizations such as the California Federation of Teachers and the California School Boards Association.

It is widely supported because it helps students learn to compete in a global economy. Students with a strong proficiency in English and another language are better prepared to compete in the workforce. Advantages of being multilingual include having higher paying jobs, an increase in creative thinking and being more connected to your work and community.

Opposers of the proposition argue that there is no need for Prop. 58 because Proposition 227 was successful. According to the California Voter Guide, people for Prop. 227 said that, “within four years, test scores of over a million immigrant students in California were up 30 percent, 50 percent or even 100 percent.”

However, Prop. 58 supporters said that is a lie. According to the American Institutes for Research, after a comprehensive five-year plan they found that “there is no evidence” to support their claims of Prop. 227 being “widely successful.”

Local high school student, Alaniz Enriquez, supports the proposition stating that, “I think it’s a good thing because now students won’t have to be in Spanish only classrooms and it gives them a chance to learn English in a healthy environment.”

Proposition 58 will likely go into effect next year.