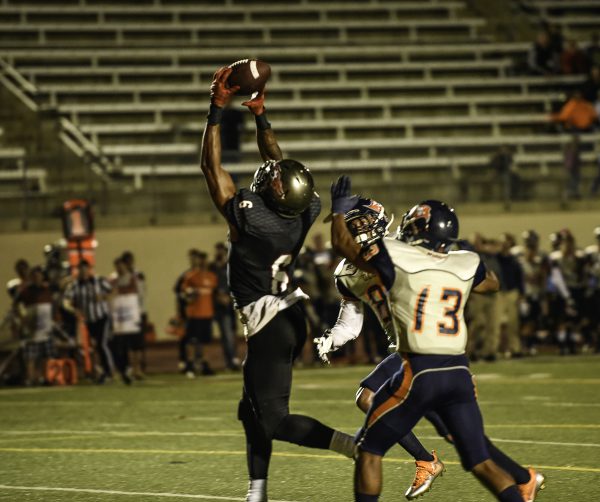 The Comets football team tagged a win against the Orange Coast Pirates by the skin of their teeth.

The Comets opened up the game with a touchdown on their first drive after winning the coin toss and choosing to start the first half with possession of the ball. However, the thrill of scoring so early was short lived, as the Pirates came back strong from trailing in the first half 21-14 to scoring two touchdowns in second half to take a 27-21 lead over Palomar giving the Comets 3:35 to capitalize with a touchdown.

After a Comet’s turnover, Palomar got the ball back, but with only :55 left of regulation. Palomar ran four plays for 55 yards and ended the drive with a 20 yard game winning touchdown pass to give Palomar a 28-27 victory over Orange Coast.

Josh Bernard scored the first touchdown, leaping into the endzone firing up the crowd and his teammates. Bernard had an amazing game, running the ball 22 times for 102 yards with two touchdowns. He made two receptions for 87 yards. The only thing that could be taken away from his performance was a fumble with 2:00 left in the game while being down by six points.

“My fmaking a comeback when Palomar was in the lead most of the game until the fourth quarter. “It was a tale of two halves,” said Early. Palomar had a great first half, but the second half was not so good.

Early was also proud of his team saying they never quit and they were there for each other.

The team kept believing and did not show one ounce of disbelief that they wouldn’t win. The only thing Early is taking away from this game is that the team has to focus on all four quarters.

Sam Tapia was in charge of the field goal and place kicker duties. Tapia missed his only field goal attempt but made all four extra points. He also did a great job punting, pinning the Pirates down at their own three and eight.

The Comets are on the road for the next two games, then come back home on Saturday Nov. 5 at 6 p.m. against Saddleback College.