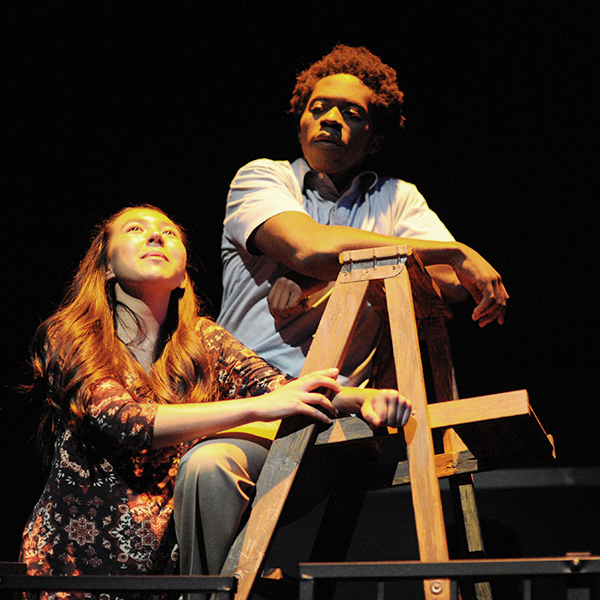 “Our Town” came with a flourish of simplicity and then it went, with little thought given after as to what the play was about or the two hours spent engrossed in the daily routine of a 1900’s American town and their off-shoot accents.

Directed by Dana Case, “Our Town” is a Pulitzer-award winning play written by Thornton Wilder and chosen by the department for its recognizable title and its spirit of hard- working honest Americans. However, in attendance it would appear that the play was only recognizable to the elderly set of our college community.

As the first play of the season it was a good starter for what’s ahead for the department and its beginning actors. Performed in the Studio Theatre on Palomar’s main campus, the small intimate setting of the theater played heavily on the simplicity of the play by utilizing the surrounding environment and the little use of props.

“Here, some scenery for those who think they need scenery,” said Heather Fiore, Stage Manager, as a set of tables and accompanying chairs filled in the stage and a pair of ladders flanked the audiences rear.

These few pieces of mundane furniture would make up the entirety of the props and stage set used throughout the duration of the play. Actors were left to mime out interactions with objects and between one another such as a delivery exchange of milk between Lea LeBrun, Mrs. Webb, and Myron Crowe, the milkman Howie Newsom, the impressive ranging of an imaginary horse by Crowe and the gentle, yet elegant, flick of the wrist as LeBrun and Monique Barbour, Mrs. Gibbs, strung a basket full of beans.

The small stage felt as though the cast list was quite thin even with its boisterous 17 cast members, five of which played ensemble. Though this all played into the nontheatrical aspect of the play and honed in on the small town feel and intimacy of the 1900’s.

Fiore was a sure fire standout in the play as she narrated its events in her endless abundance of monologues. Her energy and command of the stage cumulated as a driving force propelling the play forward and at the same time letting it stall and sit idle as you take your time to gaze into the lives of two neighboring families growing together through life, marriage and death. Fiore’s charisma kept the audience entranced and guided the play along its three acts.

Delaney Dietrich, Emily Webb, and Kofi A. Ofori, George Gibbs, were two accompanying lead actors who also shined in their roles. Both as love interests playing off the effervescence and delightful ignorance of youth and then into the uncertainty and often times darkness of adulthood. Between the light and jovial walks of two teens in love to the floor raising mourning of a lover in grief Dietrich and Ofori outshone their talents.

Though the sweet choir melody played by the ensemble against the ambient sounds of chirping crickets was delightful, “Our Town” was a play that is millenniums in the past. If anything were garnered from the play in some sort of enlightenment it would be this generation’s attachment to technology and the necessity to unplug and take note of one’s earthly surroundings; such as an exchange between Dietrich and Ofori as they gazed into the splendor and opulence of a full moon. But topics like these are in abundance and often redundant and will do little to fill the seats of a theater by Palomar’s millennial students.

“Our Town” was a splendid trip back in time with a cast filled with amazing, and still learning, talent but its return destination to the campus would be not so sorely missed.