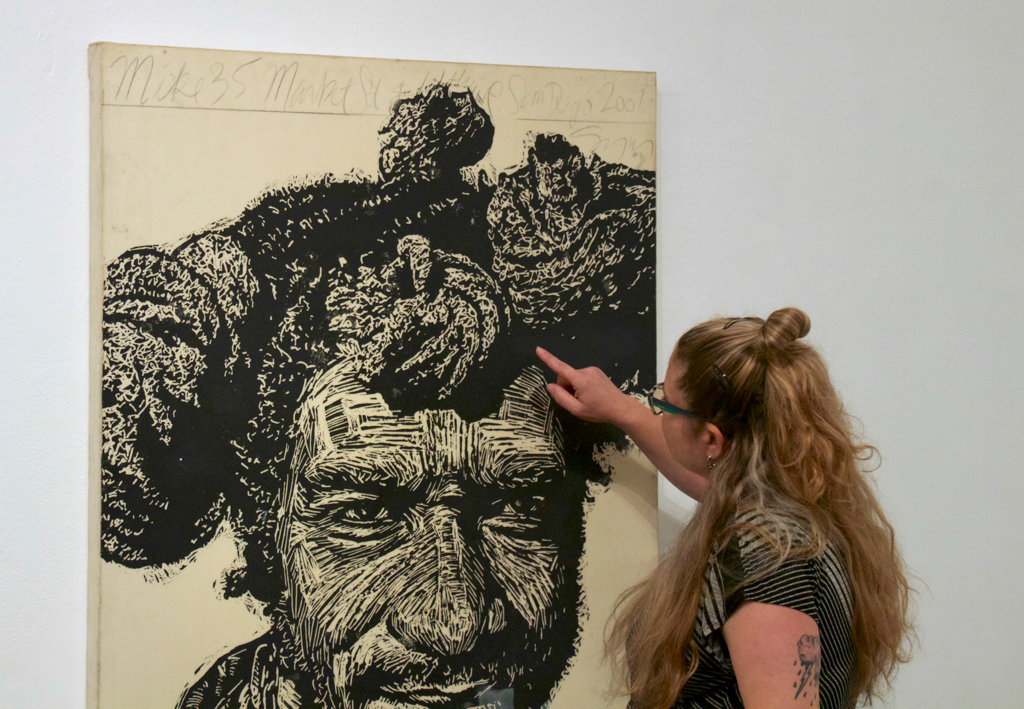 In the midst of a heated political season, Boehm Gallery Director Sasha Jonestein looks to tackle politics and the people who are affected by them with the gallery’s second exhibit of the semester in “We the People.” The exhibit is currently on display at the Boehm Gallery through Nov. 8.

Jonestein believes artists have a responsibility to be political in their artwork but decided to take a subtle tone surrounding politics and examine “who we are as individuals, who we are as a country.”

“I do always try to think of what’s happening in society and it seemed very ignorant to ignore that we’re in the middle of a huge election, but I didn’t want to go very direct,” Jonestein said.

Sarah McNutt, a San Francisco- based ceramics artist and educator, is one of nine artists who will be featured in the exhibit. Her pieces focuses on psychology and her work “Instilling Fear” takes the idea that fear is a device used for manipulation and examines that relationship between individuals and within a political context.
The work displays a small ceramic-female child within an inflatable pool where an “ominous” toy sharks float around the child in a circle. A live feed projection is cast on the child where a passerby is super imposed on the work from within the gallery.

“It’s the idea we both are participating, but also victimized by this type of culture where we do try to manipulate each other by fear,” McNutt said. “Whether it’s a very subtle way, causing someone to worry, or in a larger scale where we see agendas being pushed based on a generalized fear of something happening.”

The exhibit looks to utilize portraiture from artists such as Ian Cuevas, Marianela DeLa Hoz, Lily Glass, Michael Massenburg, Bhagvan Mehta and Christina Renner Vogel. PANCA, a graffiti artist based in Tijuana, will also be featured. Her work tackles her identity living in both San Diego and Tijuana, and the political divide surrounding the two places.

“I thought the best way to do that was to have direct portraiture,” Jonestein said on her choice of art form for the exhibit. “I tried to do very straight forward, single viewer, large scale so were really looking at just the faces that make up our populace.”

“It forces people to confront these people in the portraits making them visible in some way again,” Shigley said.
The large black and white block prints began as one image Shigley said, but quickly became a series of prints after his increasing empathy for their plight and his humanity sought to utilize the power of art to focus attention on homelessness.

“It kind of started pretty innocently. I saw a man that was homeless and I thought he had an incredible character,” Shigley said.

Shigley said the block prints inherently have a graphic nature to them, and looking back meaning could be attached to the art process in relation to the harsh realities of his subject’s daily life.

“The technique of carving and carving out the features can relate to life being harsh and the history and struggle of daily life kind of etched into peoples faces,” Shigley said.

McNutt expounds on the idea of sparking insight from Shigley by saying that she hopes her work creates, “some thoughtfulness into the experience of having a visual content but causing you to have a different line of thought you wouldn’t have previously considered.”

“It’s a way of having a conversation, but not very solitary manner when you’re approaching a piece,” McNutt said.

“I’m very excited and I’m a little anxious. For the past three nights I have dreamt about it, I have literally dreamt about hanging these shows,” Jonestein said. “I hope people find (the exhibit) relatable but still challenging and engaging.”