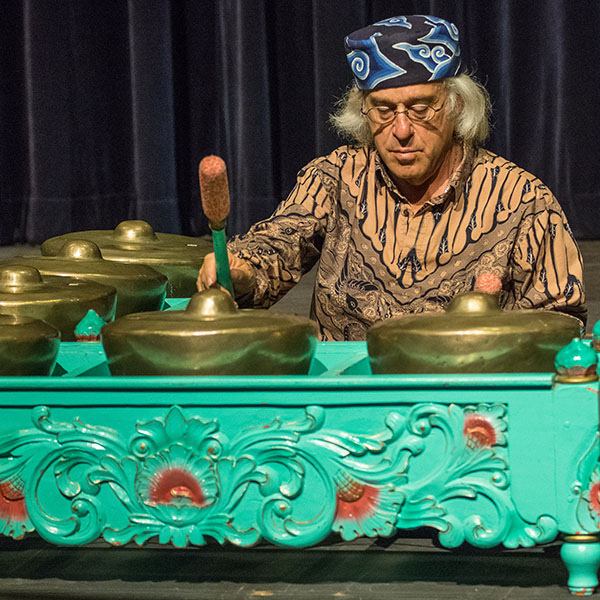 The ancestral sound of Indonesian music rang out in Palomar’s Howard Brubeck Theatre during the weekly Concert Hour on Oct 6.

The idea behind Gamelan Degung music is to build songs through layers. It is organized into cycles of periodic punctuation, melodies, and ornamentation. It is traditionally heard at weddings, elegant events, during meditation, to welcome guests, and to accompany dance.

While missing two members during this performance, the group consisted of Garit Imhoff, Mary Jo Redman, Max Berry, Randy Griswold, and Palomar Professor Amy Hacker. All of the members of Kembang Sunda have spent time in Indonesia and value its culture; something that resonated with those in the audience.

“It’s interesting to get a whiff of diverse cultures and I’m happy I got to watch.” said Peter Jeziseki, a 19-year-old Education major at Palomar who was in attendance. “It’s like going to a different cultures restaurant and trying new food, it helps you understand.”

The concert was a total of eight songs varying from lullabies to love songs, and the ensemble consisted primarily of eight bronzed tuned idiophones, an instrument that vibrates to produce sound when struck or hit.

“When sound is in the air, you’re actually grabbing the key and getting the vibration into your body,” Imhoff said while talking about playing the idiophone. “It’s a great sensation to have all that music coming through you.”

The other main instruments used in the performance were the large hanging gong (go’ong) that acts as the signature sound, a set of tuned drums (kendang) which notify the conductor when to start and end the song, and a bamboo flute (suling) that embellishes the melody.

The performance ended with a song which was very fast paced, one that presented audience members with images of running through a suspenseful south-eastern temple with Indiana Jones.

“My favorite part was the last song,” Vinci said. “They picked up the tempo.”