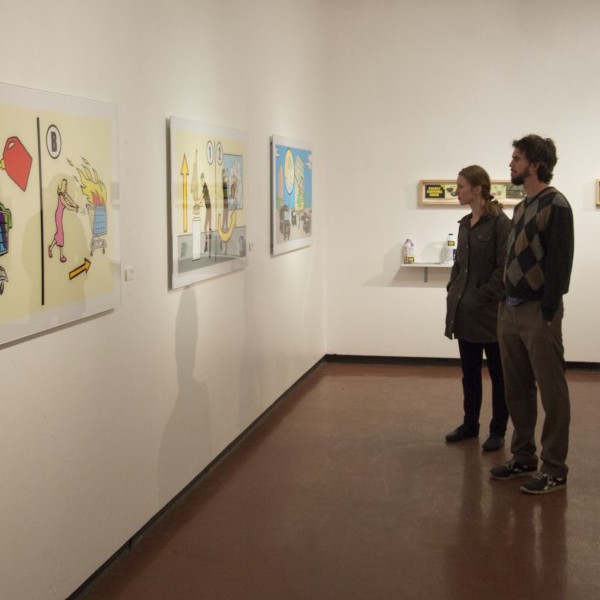 Push the status quo at ‘Art of Dissent’

Blown glass, photography, and performance art — all reflecting the spirit of dissent and questioning the status quo — will be on display at Palomar’s Boehm Gallery until April 22.

Artist, Daino, has a background steeped in self-taught painting and illustration, which propelled him into Cal Arts and led to him experimenting with conceptual art.

His latest project started with photographing bees in his backyard in Riverside. Then he started seeing red ants salvaging bee carcasses, which then led him on a three-year-long journey following the ants.

His investigation was an endeavor into seeing how the insects relate to humans.

“I was trying to seen how they behave and how we behave in our groups, in our work, and in what our duties are as humans,” Daino said.

To visually anthropomorphize the insects he coated little signs with honey for them to be carried in and out of ant mounds.

“Even though they don’t understand or read that stuff, they understand it as important,” Daino said.

He connects this as an analogy to human life through the lack of individuality in the colony. Specifically through the conscious or unconscious need to feed into the whole.

“What does it mean to be an individual?” Daino asked. “We’re always focusing on other things. We stress and deal with a lot these emotion due to external needs. Needs that often have nothing to do with us.”

The signs Daino gave the ants, carry an air of humorously dark commentary, such as one that reads “It was an inside job.” He connected it through the statement that there are larger forces paying with our lives and political system, to the ant’s life of also being at the will of some larger machine.

He further expanded this in his piece depicting an ant crossing the towering figure of a dog.

It touches on a kind of unapologetic apathy to this larger force.

Another artist on display is Photographer David White. He has taken it upon himself to document the return from the suburbs to the East Village in San Diego, and how the consequential development of that area for the upper middle class, has further disenfranchised the homeless community.

White describes his photography of the development as capturing the juxtaposition of housing for the upper middle class taking place alongside poverty.

A key emphasis of his work is the impounded property signs going up in these areas and the warning that comes with them for the homeless encampments. That confiscation of property is to clear space for buildings and making the area more amenable for those in the market for a luxury high rise.

Another part of the tragedy, that he described, is that if you’re not homeless, these signs aren’t a noticeable factor in your life. To combat this he has taken to enlarging these signs behind a light box.

“The light boxes are trying to draw attention to these subtle signs that you don’t see around the city,” White said.

White describes the phrase “Return to the City” as problematic, since it ignores the people who have been disenfranchised by the city.

“The middle class people who fled the city in the 60s in the first place are now saying I’m sick of these commutes, I’m sick of eating at Applebee’s, I want to come back to have craft beer and the urban experience,” White said.

He explained that while money is being put into development, the real infrastructure problems of schools and transportation aren’t being addressed, even though they would help people at large. This is due to it turning into a “privatized urban environment.”

For outreach purposes he has taken to handing out yellow tarps, which the homeless use to shelter themselves. The coloring of the tarp also connects back to the yellow of the impounded property signs, and the accents on one of the buildings, creating what White describes as “using the same strategy that the (city) is using for attention getting, while also having it be useful.”

Another element of the show is a work on immigration. Performing artist and photographer Claudia Cano, showcased her character Rosa, an immigrant from central Mexico, whose either running away from violence or to support her family.

Through performing as Rosa, and cleaning public spaces, Cano brings attention to the struggles of being both a woman and an immigrant.

“As a performance artist, it’s not up to me to decide what the viewer has to interpret. It’s more questioning why is she there, why is she wearing that uniform, is she really cleaning?” Cano said.

Cano added that what she strives for is creating “this atmosphere of doubt about the character and about invisibility.”

Cano described Rosa’s interactions with people as introverted, due to her being an immigrant into a foreign culture.

“Rosa doesn’t talk to anyone, unless someone talks to her or asks her questions. She doesn’t speak English, so that’s also another element of the performance. They have to speak Spanish or make it work. That’s how immigrants feel when we have to learn the language and adapt,” Cano said.

Cano’s background comes from marketing and photography, where her experience is primarily from behind the camera. Now as Rosa, she is in front of it.

“When I’m performing, I’m not Claudia. I’m (Rosa), so there is a tremendous exercise before becoming her, ” Cano said. “It’s more empowering. Empowering myself and my race and my gender in someone who can’t speak. Someone who doesn’t have a contents of the arts to talk about.”

Cano explained part of becoming Rosa as a divorce from the self, in that she and Rosa are their own separate entities.

Glass and installation artists, Einar De La Torree and his brother Jamex, have two feet firmly planted on both sides of the Mexico and California border. Einar describes the border as very dynamic.

Einar showcased this dynamism in their piece. The holographic wall mount depicts Jesus and his disciples sitting at a table with the border plastered over it. As you shift your perspective, both Einar and Jamexs’ face are seen plastered over those of the disciples and Jesus.

The Torre brothers chose the imagery of the last supper to depict a business meeting about division of city and district lines.

“We did this for a show in San Jacinto. We were fascinated about how San Jacinto is part of San Diego, even though there is only a very thin filaments connecting it,” Einar said. “The reason San Diego kept it is about money. If you have things that cross the border they’re paying taxes.”

Their mural, Einar describes as depicting Spanish conquest in the new world.

The image houses a barrage of imagery other than just the flaming ships sailing to shore, Einar specifically pointed out oblong shapes coming from the boats to the beach as small poxes, “the way the west was won, so to speak.”

The brother’s idea of the flaming ships came from Hernan Cortez ordering his ships to be burned upon arrival in the new world.

“They wanted to make a base in the new world, they can eventually build new ships, but they wanted to, well, take over firs,” Einar said. “There is a long story behind burning down of the fleet. We use it now as a way of saying I’m going to burn my bridges to the past,” Einar said.

We were then brought to one of their glass blown pieces, titled “Bible Belt.” The piece depicts a skeleton brandishing a bloodied cross-shaped stake whilst standing atop an alter.

Einar described the stake as cross connecting to an analogy of vampirism, this coupled with the peasants at the foot of the altar offering their children as sacrifice acts as a “comment on religion that is maybe not so favorable.”