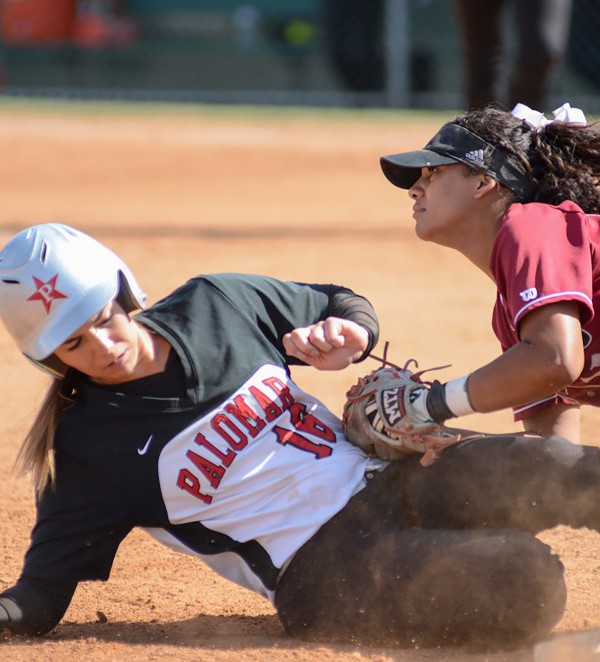 Palomar softball: a driving force at the plate

Palomar’s softball team has a supreme offense that cannot be matched.

Whenever Palomar has a runner in scoring position, their offense keeps its composure and capitalizes on each opportunity which has led them to their current record of 23-4 (stats as of April 7).

Overall Palomar has won 15 games this season by way of mercy rule. Three of Palomar’s biggest wins this season ended with a final score of 14-0 against Antelope Valley, 19-1 facing Mt. San Jacinto, and 18-0 versus Chaffey — all three of which were away games.

The Comets have averaged roughly 9.5 runs per game this season giving opposition pitching staff’s fits when facing any place in Palomar’s lineup.

Wednesday, March 30 game was cut short in the fifth inning due to the mercy rule, ending 9-0. Palomar rallied early in the bottom of the first inning driving in six runs on six hits, while bringing up 11 batters to the plate before San Diego City College got the final out of the inning.

Palomar is ranked fourth in the most recent CCCAA state poll and second in the southern California regional poll, just behind Cypress.

Palomar’s lead-off hitter, freshman utility player Brianna Dunckel, is perfect in stolen base attempts with 16 — which puts her in the top five in PCAC. Dunckel is also in the top 10 in conference play for batting average with a .468 average in 94 at-bats.

Palomar’s clean-up hitter, third baseman Iesha Hill is in the top five in conference play for batting average (.470), home runs (6), and RBI’s (26). In last year’s state finals Hill was named the most valuable player of the tournament as the Comets captured their fifth state title.

“What motivates me is my coaches and my teammates because they push me as well as me pushing them. We push each other and motivate each other to always work hard because we know we’ll always have each other’s back,” Hill said.

Huddleson said she keeps her focus in big games by not letting the little things get to her.

Iesha Hill and Brooke Huddleson have been two of the standouts in what is a stacked Comet lineup.

As per superstitions that possibly help the team achieve their success, Huddleson said everyone on the team has something different . She says some have to wear the same bow each game, others have to be in a certain part of the lineup, but it depends it mostly depends on the player. A lucky rubber duck also has a place in the dugout helping push Palomar to glory.

To catch Palomar’s offense and star pitcher Summer Evans in action head to their next home game on Tuesday, April 12 at 2 p.m. when the Comets host Riverside City College.