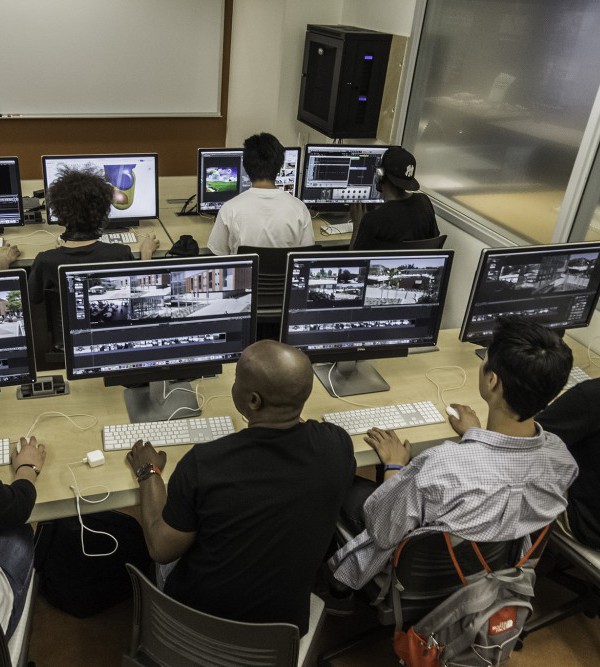 Palomar graphics professor, Mark Bealo, considers himself a trade show connoisseur out to find new ideas, technology, and advancements in the field.

It was when he was attending the National Association of Broadcasters (NAB) in 2014, where he stumbled upon a booth containing two computers connected with one cable in order to transfer files at a fast speed. For the next two years, Bealo knew he had a project in the making.

“I saw that and I was like gosh, it would be great if they could connect more computers than just the two because that would be ‘networking’,” Bealo said.

Bealo wanted to create a solution so that files could be shared at a faster speed among multiple computers while maintaining storage space. Not only would the speed be faster, but this new project would enable students to work on collaborative projects within small work groups with shared access and storage.

However, this solution came with a hefty price tag. Companies at NAB were offering a solution along with a $120,000 invoice. With troubleshooting skills and dedication, Palomar did it their own way which in the end totaled $33,000 funded by Perkins, a foundation founded by Carl D. Perkins to fund Technical Education. Overall, it was significantly less than the first solution.

“We want to make sure what we’re doing meets industry standards so when you go out (in the business world) you’re not totally lost,” Bealo said.

In December 2014, Intel released a white paper (an authoritative report providing information), that revealed how to bridge two or more computers through a Thunderbolt Cable. This enabled Bealo to understand the technical process behind making the project possible. The only problem was that it was written for PC’s, and the Palomar lab used Apple Macintosh computers.

The goal was for every row of computers in the lab to be able to work on a shared collaborative project and sustain a file that held a large amount of gigabytes. With the help of hard drives installed into a RAID (a system that makes multiple hard drives be seen as one), the project took off.

The computer connecting project was finally finished in October 2015, increasing the efficiency of collaborative educational projects for students, according to Bealo.

“If we’re talking video, if we’re doing a team based project, it’s here. You do this part, save it, and I’ll open it up and I don’t have to ask you for the files. It’s all already there. The accessibilities amazing,” said student Raymond Diramos.

Bealo, former students, and industry friends shot a video explaining how to pull off this sharing method, and sent it out to professionals for feedback.

Running into Intel at a tradeshow for the second time, they directed Bealo to Corning Fiber Optics who would have cables long enough so that the RAID’s could be relocated.

Corning, who had already viewed the video, saw Bealo at the North American Music convention,they sent over ten cables, cutting costs and enabling expensive equipment to be locked up.

“My goal is for other educational facilities and people in the industry to implement this, save a ton of money. Instead of buying a $120,000 dollar networking system so that five or six people can work together,” Bealo said.

Now, Bealo hopes to release the new video explaining the process in April. Giving it time to reach industry professionals, but also to those who want to implement the idea in their own classroom.