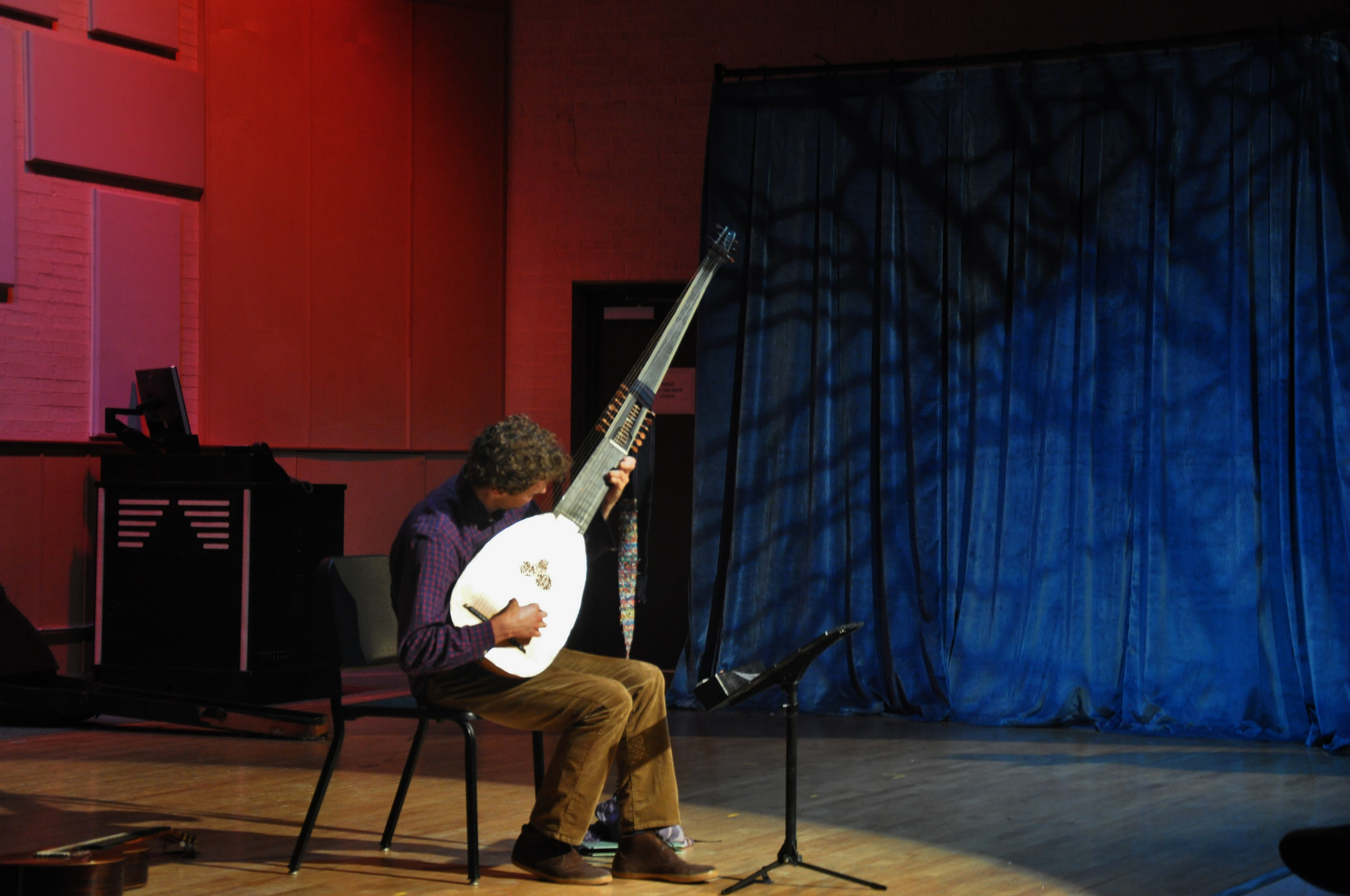 Dominic Schaner, a professional lutenist, musicologist and composer, performed an improvisational show during the weekly Concert Hour on Feb. 18 at the Palomar College.

Schaner is a Palomar College Alumni and has studied music theory and historical performance at Boston University where he focused on learning how to play instruments that were created before the 1800s.

Schaner has also studied at the University of Cambridge and completed research at Harvard University.

According to Schaner, while he was studying at Boston University, a musicologist at Harvard had invited him to study hand-written lute manuscripts. The manuscripts were written by a lutenist in the 1500s based off of the renowned Italian composer, Lucca Morenzio, from the late Renaissance.

“I’m interested in the performance practice of this music and that’s what I try to highlight,” said Schaner. “Most of my themes at concerts explore a myth or mysticism or try to illuminate, highlight, or magnify and idea during the Renaissance or during the time of the music.”

For those of you who are not familiar with the lute, it is a European stringed musical instrument (like a guitar) that was popular during the 1500-1600s. Lutenists play the lute in a classical guitar-esque fashion by using their dominant hand to pluck the strings and their non-dominant hand to press the strings down on the frets to hold the desired notes.

An archlute is an impressive instrument that was popular during the 1600s and, according to Schaner, is a modified, 6-stringed lute with an extended neck and a larger bridge.

Schaner’s particular model was around five feet long, with 14 strings, and was crafted in the ‘80s. He used the instatement for five out of the seven pieces.

Schaner’s guitar was tuned in an open G-minor chord to mimic the sound of a lute crafted in the late Renaissance and early Baroque period (16th-17th century) and was used for two out of the seven pieces.

Schaner’s performance, titled “Lamentatio Orpheo: The Many Lamentations of Orpheus on the Death of Eurydice,” was based around the ancient Greek myth of the famed lutenist Orpheus and the death of his lover Eurydice.

According to Schaner, there are many interpretations of this particular myth, but all revolve around Orpheus’ “god-like” skill with the lute and his ability to communicate with the deities, which later granted him passage to the underworld in order to retrieve Eurydice and bring her back to life.

Orpheus was given one chance to bring his lover back under one condition: he was to trust Hades, god of the underworld, and refrain from looking back to check if Eurydice was with him until they had gotten to earth.

This story ended tragically for Orpheus. He lost his trust in Hades, and right before entering the realm of the living, he looked behind him to see if Eurydice was, in fact, present. She was; however, she was immediately drawn back into the hellish realm to remain for eternity.

“The idea of sadness or what melancholy is during the Renaissance is a lot more complex than how we think of it today,” said Schaner. “It’s not just being sad or depressed. Melancholy can be the moment before an artist gains inspiration and creates something; it can be that tiny moment.”

All seven of Schaner’s pieces followed this theme of sadness and captured the moment where Orpheus’ love is consumed by the depths astonishingly, providing low-to-high minor note progressions.

Each song painted the picture of the myth and all were truly gloomy, yet beautiful.

The fifth set, titled “Ricercar Sobre Fantasia #66 Del Divino,” utilized a polyphonic chord system that explored a plethora of different note sequences to improvise a fantasy for the audience.

The melancholy hymn of an ancient Greek artist lamenting for his love, rang true to the ears of the audience, as Schaner compiled the many layers of complex notes, providing a sudden rush of grief, regret and hopelessness.

“I’m exploring the myth of Orpheus in that context [of melancholy] and it ties in so many different ways,” said Schaner. “One way is that Kapsperger, Da Milano, and Bakfark were all considered the ‘Orpheus’ of the lute. Francesco Da Milano was considered to be superior to Orpheus and to Apollo ; so he was a better lute player than the gods.”

Schaner’s play style was improvisational. When asked about this Schaner said “The ability to improvise in a fantasy is paramount. The music I like playing is really slow, polyphonic, multi-voices weaving in and out. Think of one melody, but then six or seven other melodies happening simultaneously weaving in and out.”

Before Schaner’s talented performance, he explained:

“Here’s music from the 1600s, here’s how people would have thought about the myths (they’re kind of lost to us [today]) and how they would have severely impacted life during that time. The first operas that were written were written on the myths of Orpheus and Eurydice.”

Schaner also clarified that the music he played is a lot more complicated than just popular music at that time. “This really interesting confluence of how important the lutenist was what they meant to social commentary,” Said Schaner. “So it’s many different angles of exploring this myth, the mythical status of the composers that I’m playing and also the type of music; it was made to evoke certain emotions that you can find in the myth of Orpheus and Eurydice.”

You can find out more about Dominic Schaner on his bandcamp page at https://dominic-schaner.bandcamp.com or by simply searching his name on the internet.