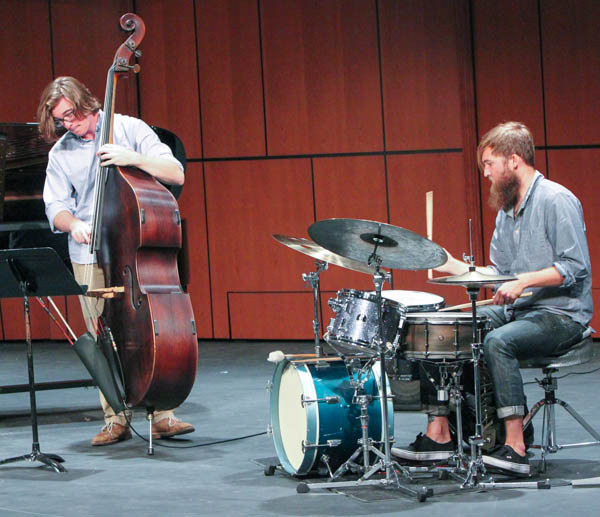 The Trio consists of three talented musicians: Matthew Smith, Edward Kornhauser, and Mackenzie Leighton, who all have college backgrounds.

The Trio played an hour-long set of five compelling songs, each a combination of unified craftsmanship and emotional expression.

The first song, titled “Slim Dusty Rides Again,” started off with Leighton offering a charming, mellow, and catchy bass line that instantly caught the crowd’s attention. Kornhauser then joined in with soothing notes from the piano that not only complemented Leighton’s riff, but also set the background and prepared for the quick and complicated drum beat that Smith gradually threw in.

With all three members playing together, audience members started to bob and sway their heads and move their bodies to the melodious flow of swift build-ups and sudden, relaxing break-downs. The song closed with heavy, synchronized drum and bass and frantic notes from the piano.

“Amrita,” the second song, opened mysteriously with an almost sneaky bass line from Leighton, coupled with fast jumps and teasing impulses of Kornhauser’s piano. Smith’s drums were smooth but varied, providing more beats than Leighton and Kornhauser’s combined tempo, giving Smith the lead role. This song portrayed the unison of the bands members with incredible timing between the pianist and bassist while showing the adaptability of all three by allowing Smith to lead with drums.

There was a massive amount of facial communication throughout this song. At times, Smith was laughing to himself, while Leighton displayed expressions of anger. Kornhauser and Smith seemed to be be having a conversation at one point, both showing mischievous facial expressions, which were reinforced by the tempo of the song and led straight into their third song.

“Knewt,” a Monty Python reference, gave off a chill, groovy, and silly vibe. The name itself shows listeners that the Trio possesses a sense of humor. However, after the silly intro, the song took on a sad, slow tempo of deep bass and piano. The slow ambiance created a sense of gloom and reflection. Suddenly, an explosion of quick complicated beats erupted from Smith, combined with an increase in octave and tempo from both Kornhauser and Leighton. The Trio finished the sad story of “Knewt” with a conclusion of happiness.

The fourth song, “Pig Pen,” was an attack of rapid bass by Leighton that picked up an organized flow once Kornhauser and Smith chimed in by offering their own steady and unanimous tempo. Kornhauser changed his tempo to his own flurry of expression, key strikes erupting from his fingers, while the remaining members took upon the steady backdrop.

After Kornahuser’s flurry, Smith carried on with his own solo of rapid snare strikes and constant symbol smashings while the bass and piano offered the continuous rhythm. This song was an opportunity for each member of the Trio to express themselves with their own section of solos.

The last song was a cover titled “Hammocks and Cabbage” by Christian McBride and was performed immaculately. The sassy tune of calm, familiar jazz mixed with a bluesy attitude created a triumphant and prideful atmosphere. The Trio ended this catchy number heavily and with a bang that caused some audience members to give a standing ovation.

After the set, the Trio revealed to the Telescope that they have been playing together for three years. “Playing together is a full time effort,” explained Leighton. “We have weekly rehearsals.” Smith described the band as “an opportunity to lead,” and explained that their main influence as a band is The Bad Plus, a jazz group that, according to the New York Times, is “better than anyone at mixing the sensibilities of post-60’s jazz and indie rock…..”

The Matt Smith Neu Jazz Trio not only performed spectacularly, but quite modestly. After thanking the audience and the Performing Arts Center for the opportunity to play at the Howard Brubeck Theatre, they happily invited audience members on stage to ask questions and to purchase their CD: “Shorthanded.”

Further information is available on the Trio’s Facebook page and on their Bandcamp profile.

The Concert Hour is held every Thursday from 12:20pm-1:20pm. Visit the website at palomar.edu/performingarts/concert-hour for more.