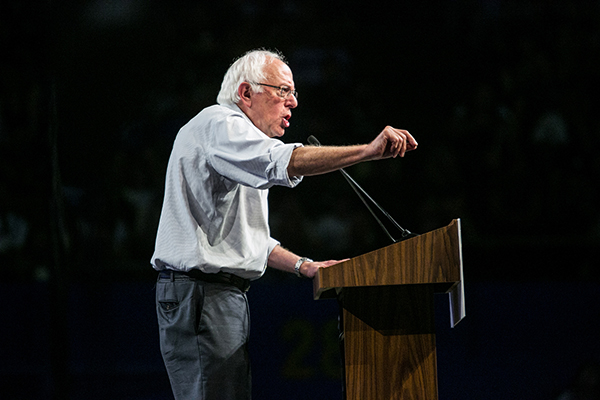 Bernie is just crazy enough to make a difference

Call him crazy. Call him a socialist. Call him unelectable. Hell, call him whatever you want.

The fact is that Bernie Sanders is a phenomenon. A homegrown, grassroots contrarian whose voice has resonated with a lot of people this election cycle.

And he has some excellent ideas.

It’s hard to fathom how a presidential candidate running on a platform of economic equality, creating jobs, and getting money out of politics can be ridiculed at all.

But we shouldn’t expect much from a race where Donald Trump and a 15-year-old with a ridiculous name are actual candidates.

According to Bernie’s website, “America now has more wealth and income inequality than any major developed country on earth.”

Bernie is getting flack because he is vocal. He’s not afraid to say he’ll raise taxes if elected. That takes a man with some moxie.

Whether you’re left, right or somewhere in between, we need to give Bernie Sanders’ ideas a serious look.

According to Oxfam, the wealthiest 1 percent of people own more than the rest of the 99 percent combined. That should be a slap in our faces.

In fact, according to them, the richest 85 people in the world have more wealth than the bottom 50 percent. That’s 85 people compared to 3 and a half billion people.

There’s something staggeringly wrong with that.

Minimum wage is no longer a livable wage in this country. It has not kept up with inflation. It’s insane that people have to work two or three jobs just to survive.

Oh, and you can keep your “minimum wage is just for teenagers” B.S. to yourself. If you actually put some time into researching it, you’ll find that that’s simply not true.

And the argument that people should be educating themselves and trying to get a better job is a moot one.

Let’s not forget that college in this country is more expensive than it ever has been before. Before 1970, tuition for any University of California college was free for state residents.

In better nations than ours, college students don’t have to work two jobs just to keep from starving.

The situation is bad. College tuition is rising faster than inflation, according to Bloomberg.

This creates a culture in which getting a college education is fast becoming a luxury. It creates a culture where the working class are already tens of thousands of dollars in debt when they enter the workforce.

It’s time to stop this insanity.

Wealth inequality is one of the most pressing issues of our time. Especially when our democracy is threatened by the extreme disparity.

There is no democracy in a society that allows big money to buy its way into the political system. We can’t let wealthy interests and super PACs corrupt our American values.

These big money interests, like the Koch Brothers, can buy influence with their money thanks to the Citizens United Supreme Court case.

This case loosened regulations on campaign donations, essentially allowing corporations and wealthy interests to pour “unlimited and undisclosed money” into our political system, according to Bernie’s website.

Why these aren’t the most volatile and controversial matters of our time is beyond me. We’re content to gripe and bicker over abortion and gay marriage while this vast corruption and income disparity is allowed to go unchecked.

It’s time for America to stop living in fear of some imagined, impending socialist dictatorship.

It’s time for America to wage a war on poverty, not poor people.

It’s time for America to stand up to the corruption and vast money-driven lobbying of our political system.

Yeah, it’s time for us to actually become what we proclaim to be – the greatest country on Earth.