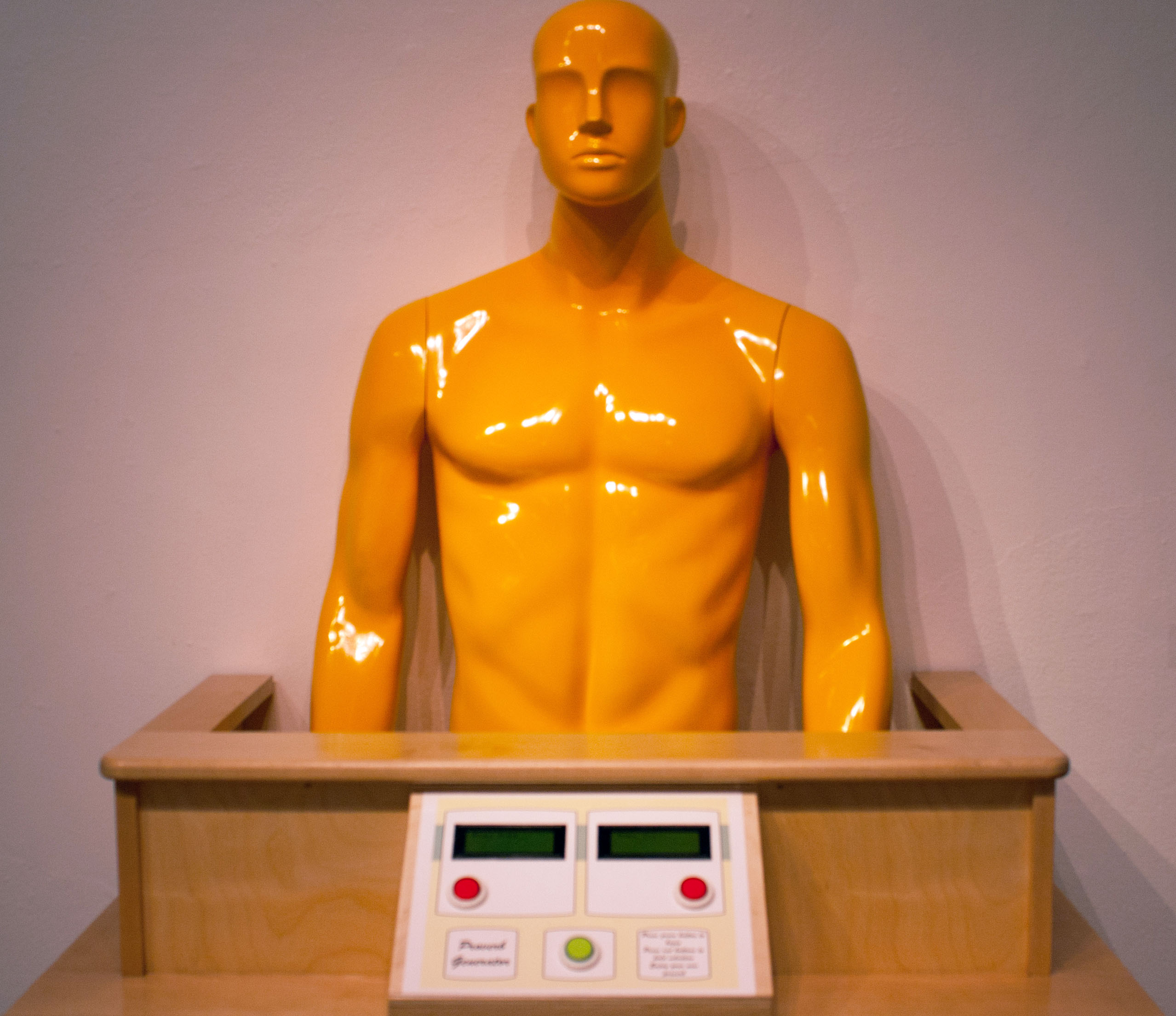 Questions in The Machine

What pervades the most in the Boehm Gallery’s latest exhibit called “Question Authority” is the concept of not taking anything at its face value. There was an ever-present push by the artist to question his own creation and to not only take his meaning from it, but also to form one’s own.

Dave Ghilarducci’s exhibit, which ends April 10, is composed of interactive mechanical installations and it centers around encouraging the viewer to interact with the work to get the most out of it. What differs from the installation is that he lets, “people become comfortable with the idea of interacting with the piece. For so long artwork has been static. Even with sculpture and installations you’re asked to sit and watch as an action is performed, now we’re violating that whole trust.” Dave said as he was describing his work.

It should be mentioned that Ghilarducci emphasised the subjectivity of his work.

“I’m not going to tell you what my answers are, I’m just going to ask questions,” Ghilarducci said. “My solution for what this means may be different than yours, but that doesn’t mean that mine is right just because I made it.”

One of the questions he proposed was “Will you work toward a better future?” This was seen in the piece titled “Delayed Gratification.”

“I’m asking you now, please take a ride,” is what he proposed as he hopped on the seat of the bolted down bike frame that was placed in front of an electronic monitor, that displayed Aldous Huxley’s Brave New World word by word.

“I like the idea of people investing in themselves, doing physical and mental labor giving you a certain reward. In this case you can read Aldous Huxley’s ‘Brave New World,’ a book he wrote to tell people about one future that seems like a utopia but it’s really a horrible possibility. Let’s avoid that,” Ghilarducci said.

This idea of working to avoid a horrible future also ties into the idea that you need to somehow motivate yourself to keep pedaling.

“And another thing is that each word has more value to you, because you have put more effort into the previous. The book becomes progressively more valuable and the people who stay on it tend to stay longer,” he added.

He also went on the explain that if you stop pedaling, the book would reset itself, which only further pushes this idea that you need to be invested in your future.

On the opposite side of the room was a wall of individually framed sketches of sheep titled “Just like Snowflakes.” While this was the only piece in the exhibit that wasn’t interactive or had some movement to it, it carried just as much sentiment with it as any of the others. It was the one piece that Ghilarducci said held a story behind it that directly related to his life.

“My youngest son went into the service and when he sent me a picture from when he completed basic training his head was shaved and he was in his army uniform. You would think that you would innately recognize your child, but it was hard to recognize him looking into this sea of people looking for my son.

“I realized at that moment that they had taken his individuality, but they didn’t take his identity. So at that point I started thinking about it, I drew these 144 sheep all in one sitting. And if you look at them they’re very similar but each one has their own little differences with their own little identity,” Ghilarducci said.

After this more personal piece we were off again to see the rest of the exhibit that continued the theme of questioning.

The theme of specifically questioning authority was perhaps most prevalent in the “Proverb Generator.” Due to it being an imposing yellow mannequin standing in a pulpit, it’s one of the more eye-catching pieces in the exhibit. In front of this mannequin is a control panel.

Ghilarducci pressed one of the buttons to formulate the premise of a proverb: “Idle hands is,” and then conclusion “the mother of invention.”

And if you were to just say this as a proverb it kind of makes sense, even though you have no idea why. Its only real purpose is to sound shallowly profound.

Later in the interview Ghilarducci discussed the values of these proverbs and what significance they have over our lives.

“They’re important. Words are as valuable as the mind that they penetrate. The phrases only matter if they have a value to you,” he said.

Ghilarducci’s work employs the idea of holding to some authority over living and whether or not following said authority is what you want out of life.

“You need to think about every decision that is given to you and rather or not that has value to you … You need to be. That is what I’m asking in all these things. All of them deal with some imagined or implied authority,” Ghilarducci said.