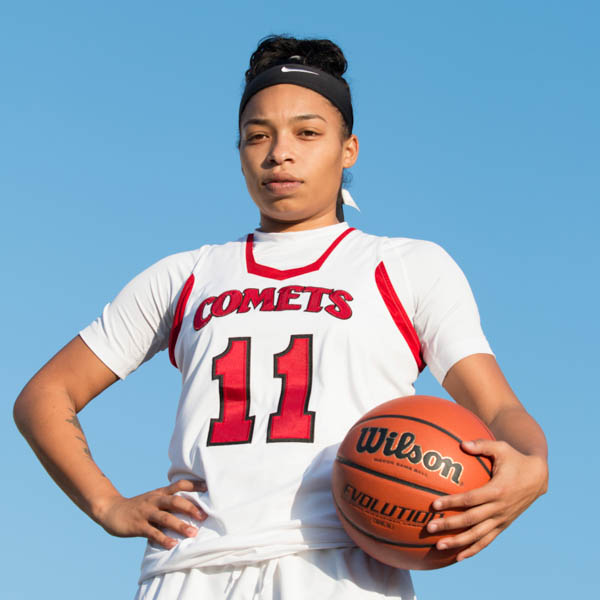 Cox relishes her role as a team leader

It all started with watching her father play basketball. Then he started teaching her, and as the old adage goes, “The rest is history.”

Now Keisha Cox, standout guard/forward for the Palomar College Comets, is ranked 12th in California with a scoring average of 19.6 points per game (ppg), and has lead the Comets to a No. 6 ranking in the California Community College Athletic Association’s state poll.

Besides winning, her favorite part of the game is practicing.

“Just having fun and coming out here during practice,” Cox said. “Making our practices as fun and competitive as they can be without us getting hurt.”

This seems to be her modus operandi for basketball in general. She keeps it fun and keeps her teammates motivated.

Her teammate Tessa Balcom said “She’s a great teammate. She’s really inspirational on the court. I’ve never had a teammate so talented, she’s like the best player ever.”

When speaking of her teammates, Cox said she likes that they are all on the same page saying “we want to win but not just win – we want to have fun and we want to help each other out.”

“When it seems like it’s not going good we all just click, we have a vibe, we all know each other,” Cox added.

“She motivates me to do better. When she’s working hard that makes me want to work harder to help her,” Sumptar said.

There’s more to Cox than just basketball, however. Although it is a big part of her life, she said she loves being able to inspire her siblings, her teammates and be a role model for young people.

As she got better at basketball, she said her friends all wanted to come watch her games. Then she said that slowly the little kids just started looking up to her, and she realized their respect and admiration made her want to be a better person.

“She’s really talented and her energy and her skills rub off on other people, Keisha has no problem stepping to the side and helping you out as a teammate,” teammate Ashleigh Barnes said.

According to Cox when they’re not playing sports they’re watching it on television, usually ESPN.

The Cox family day of rest is Sunday.

Currently, Cox admits to being into Linsanity, a documentary about the pro basketball player Jeremy Lin.

“The story is about all his downfalls and he just kept God as his number one agent and he became a better human being.”

She said she likes R&B music prior to a game because it relaxes her. Her other source of relaxation is a water turtle named Stewi that is 10 years old.

Freshman guard Melissa Allen said people may not know that there is a funny side to Cox.

“I love that she is probably the funniest person I’ve ever met,” she said.