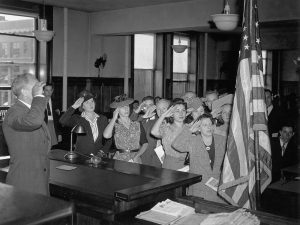 Immigrants being sworn in as naturalized US citizens in 1929. A national immigration law passed five years earlier, in 1924, greatly reduced the number of non-white immigrants to the US.

The white nationalist ideas of Madison Grant influenced Congress in the 1920s, leaders in Nazi Germany, and members of the Trump administration. This week, we share an episode we loved from It’s Been A Minute with Sam Sanders that explores a throughline of white nationalism in American politics from the early 20th century to today.