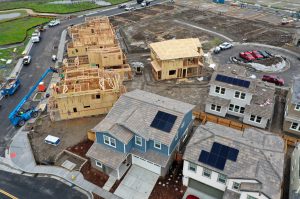 The racial wealth gap in the United States is large, and it isn’t getting any smaller.

In 2019, the average wealth of Black families was less than 10 percent compared to the average white family. Discrimination in housing that has either barred Black Americans from homeownership entirely or increased property taxes are some of the reasons this wealth gap persists.

Redlining and other discriminatory housing practices have contributed to the fact that 75 percent of white households own their homes compared to just 44 percent of Black households.

That divide has remained largely unchanged since the beginning of the 20th century. What impact has racism in the housing market had on families of color in America. And what can be done to close the gap?