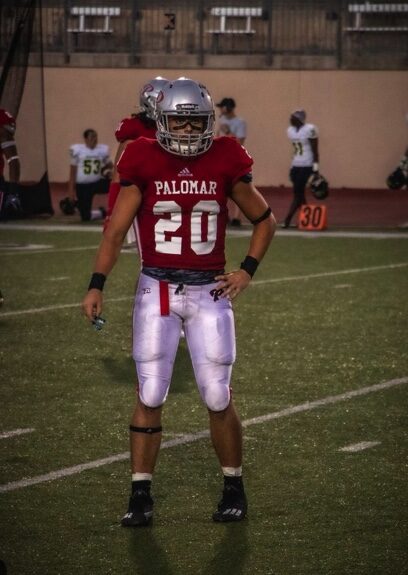 Published October 12, 2021 by Ryan Marlowe
Luke Manos, recent recipient of Comet of the Week, shares the mentality that propels him towards success.

SAN MARCOS — Luke Manos, age 20, recently received Comet of the Week for a performance including eight tackles, two tackles-for-loss, a forced fumble, and a fumble recovery against the College of the Canyons, according to Palomar’s athletics department.

This is Manos’s first year as a Comet, and since day one his charisma has had an impact on the team. He plays rover and strong safety on defense. With the season just underway, he’s already racked up 27 solo tackles, 6.5 tackles for loss, one sack, and one forced fumble.

For Manos, there’s more to football than just weekly practice; healthy habits including yoga, meditation, and journaling have been the bedrock of his performance. According to Manos, mentality is half the battle.

“Every day I practice I try and tell my guys, you attract what you think… if you’re having a bad day, and you’re constantly thinking about it, you’re probably gonna have a bad practice,” he continued, “but if you go out with great positive energy, you give it your all and just have a smile on your face, enjoy the moment and be where your feet are, man, life’s great.” he said.

A major turning point in his life was at the onset of the pandemic, which Manos took as an opportunity to get ahead, “Everybody was like, scared to go outside. And I was like, man, I’m gonna go run hills.”

His decision to take lemons and make lemonade (with a side of sweat) was inspired by David Goggins, an ultra-marathon runner, motivational speaker, and former Navy SEAL. The Goggins philosophy is simple: Mind over matter. Get out of your comfort zone. These tenets manifest in what Manos calls, his inner Goggins, which comes out whenever he reaches the threshold of his limits.

For instance, Manos recalled one of his favorite training grounds, a hike in Lake Ramona, in North County San Diego. The trek features a steep incline towards the end Whenever Manos reaches that incline his mind pleads with him to stop, but his inner Goggins blows the whistle and propels him to the top.

This can-do attitude permeates his character and uplifts the people around him. On a phone call with Cullen Shea, one of Manos’s teammates, Shea described him as supportive and energetic, “He’s just a great dude, like, he’s always the one screaming motivating everybody… he holds everybody accountable. He’s hardworking and intense, but a good intense,” Shea said.

Off the field, Manos is equally ambitious, he plans on leveraging his talent to earn a scholarship to a four-year university. Meanwhile, he hustles as a budding entrepreneur, operating Shoe Boyz LLC., a re-sale business he started in December 2020 after quitting his job at a pizzeria in Oceanside, CA.

While he isn’t certain as to whether football will become his profession, his love of the game is summed up in a single statement, “I would die on that field.”

To keep up with Manos and the rest of the Comets, check out the Palomar athletics department Twitter page, and be sure to show some love to Shoe Boyz LLC. on Instagram while you’re at it.