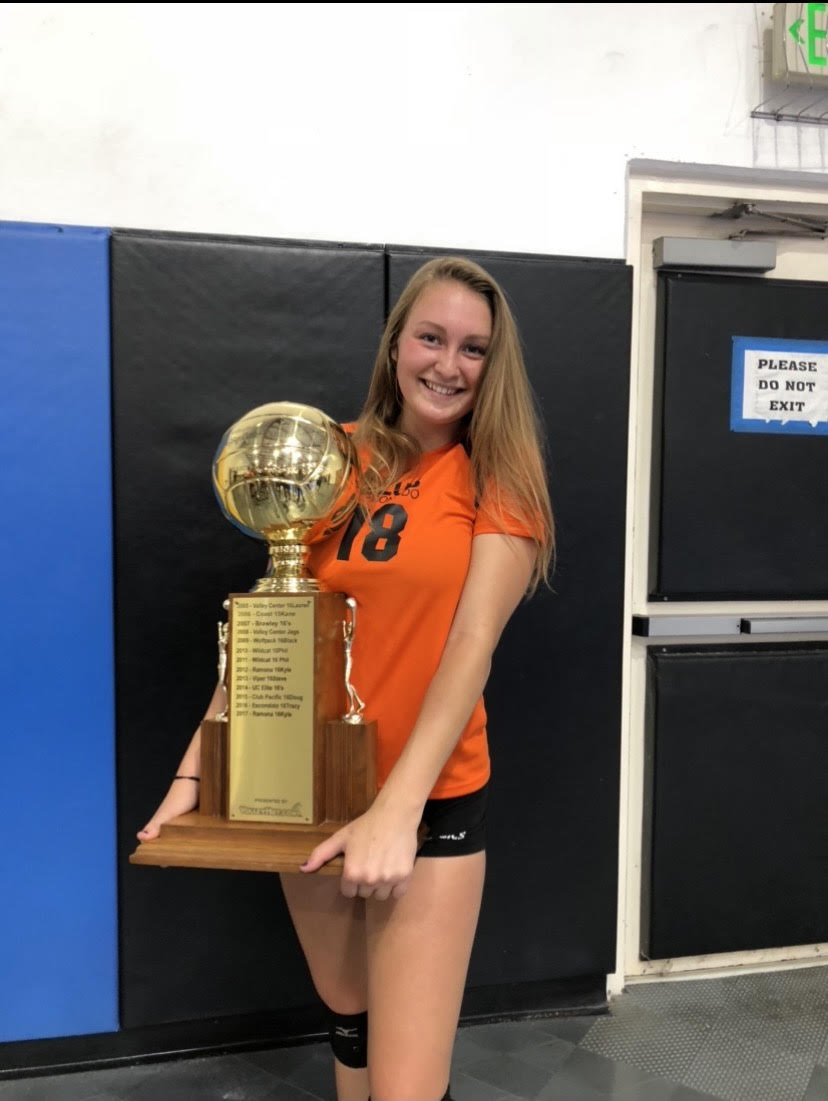 Comet Volleyball Player Shares Her Love for the Sport

Comet volleyball player Courtney Hoffman, 20, was born and raised in Escondido, Calif.. Hoffman graduated from Escondido High School in 2019 and played volleyball for the high school and 10 years with the club team.

Hoffman was able to share why she got into volleyball, her experience with the Palomar College volleyball team this past year and how the COVID-19 pandemic has affected her volleyball career and studying.

Over a Zoom call, Hoffman talked about when she started playing volleyball.

“I want to say it was around when I was five years old, so most of half my life,” she said.

Hoffman’s sister was a big influence in getting Hoffman into volleyball because her sister played volleyball when she was young.

“She [her sister] started playing at the YMCA and I started practicing with her at home sometimes, and then one day I was like ‘hey, this seems fun’ and then I played for the YMCA then later transferred to Club Escondido and played ever since,” Hoffman said.

Hoffman is studying Liberal Arts of Science at Palomar College to become a science teacher.

“I always enjoyed science and I actually was first into astronomy and wanted to become an astrophysicist, but it all started to change once my sister had kids and I liked teaching them and helping them grow up and then realized that I always liked helping people,” Hoffman said about why she wanted to become a science teacher.

Off of the topic of reasons why she wants to become a science teacher, she added, “Teaching is a great way to help children and help the future society grow.”

When asked how the COVID-19 pandemic has effected her, she said, “It definitely has been a really big impact, it has been such a crazy year, my social anxiety has definitely shot up now.”

Hoffman mentioned that the pandemic has taught her to be grateful for a lot of things. She was really sad that she wasn’t able to play volleyball and it still sucks.

Hoffman really wants to go back to school because she misses that social interaction with the students and her teammates. As more people get vaccinated she is excited to slowly return to normalcy and get back into the groove of things.

The COVID-19 pandemic didn’t effect the Comets volleyball indoor season that much last year, but it definitely effected their beach volleyball season. Hoffman doesn’t play much during the beach seasons but right now indoor volleyball is her main sport.

“Halfway through that season [2020 season] all my friends would go home, they would stop playing and would start doing workouts over Zoom and even now we aren’t practicing, we are just doing Zoom workouts about three times a week. It is still nice to be involved,” Hoffman said when explaining what happened when volleyball got shut down mid-March of last year and what the team is doing now.

Hoffman provided her opinion on if she thinks indoor volleyball can resume practicing.

“I really think so because all of these other schools and colleges and high schools, they are going back and actually playing,” Hoffman said. “So if we take the proper precautions and everything, like taking COVID tests, taking our vaccines, I think it would be totally fine and it would be safe enough too, because we all need our personal spaces, staying six-feet apart and we are all mature enough to know that.”

Hoffman is looking to attend San Diego State University (SDSU) which is her main goal, but if not SDSU then Cal State San Marcos (CSUSM). The reason she chose to pursue both SDSU and CSUSM is because they both have good teaching certification programs.

Hoffman hasn’t decided if she wants to play volleyball at the university level yet, but knows that her studies are very important and she really wants to become a science teacher.