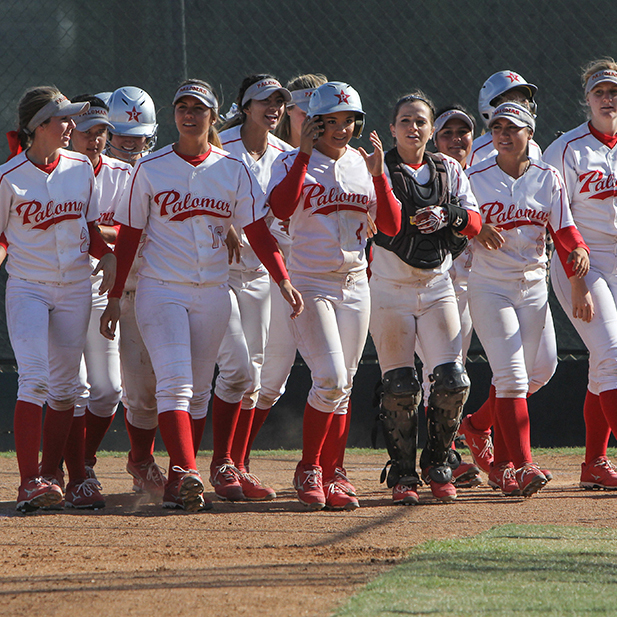 All of The Telescope Staff made a contribution.

In the wake of the announcement that all spring sports have been canceled at Palomar College, many players and coaches are devastated.

Players and coaches a part of the softball, wrestling, volleyball, track & field, cheer and football programs reacted to the news. They expressed sadness toward losing the opportunity to play and compete in the sport they love alongside their teammates, and voiced concerns about transferring and recruitment.

Samarah Martinez is a freshman shortstop for Palomar’s softball team.

“I was honestly really excited because there was a chance we were going to be able to play this year but then getting the news about our season being canceled once again, I was initially pretty disappointed,” she said over email. “With this extra time this just means we have a better opportunity to get better and grow as a team.”

Martinez is bummed that this season is canceled because the field is where she can let go and not think about anything outside of softball.

Right now, the lost season is not affecting her recruitment because she is only a freshman at Palomar, but she feels sympathy for her teammates that are getting their recruitment chances snatched.

Armando Rodriguez, a sophomore wrestler at Palomar College, said that he was blindsided by the news of the canceled season.

“Everything has kind of been up in the air since, it sucks how we just never knew whether or not it would happen until it officially happened,” Rodriguez said.

“Especially after my 2019 season, barely missing the state championships I was so amped and so ready to get back out there again in the 2020 season, then COVID happened,” he added. “More than anything it made me angry, I all of a sudden had all this free time and I did not know where to direct that anger.”

Juan Diaz, another sophomore wrestler at Palomar College, said that he was fine with the news and continues to practice at home with his brothers.

“At first I was like ah dang, I was really excited for the season, but you know, it is what it is. As long as everyone is staying safe and we’re saving lives, that’s all that matters,” Diaz said about his feelings toward the canceled season.

Cameron Erke, a sophomore on the Palomar College Men’s Volleyball team, was very disappointed at the news about the canceled season.

“I was pretty discouraged about the decision to cancel the spring season,” he said. “I feel like this because our IQ as a team was getting much better, and for that to be canceled and cut off was a big discouragement.”

When asked if he felt Athletic Director Daniel Lynds handled the situation properly, Erke said, “I do believe the people in charge such as the athletic directors are doing this to their best ability. I think it would be arrogant to say that they weren’t. Because all they’re trying to do is look out for people and their health. The last thing that we want is everyone having the virus at the school, and it spreading around the San Diego district.”

Erke said that he feels going forward, the team will be hurt mentally and it will change how they perceive things for the future.

Arlette Martinez, a 19-year-old Comet cheerleader who plans on transferring to Cal State San Marcos in Fall 2021, said that she is devastated to not see her teammates and have each and every one of their personalities out on the field.

“I wanted to do something fun before leaving Palomar to transfer, and it’s been fun but not the full experience,” Martinez said.

Jayden Dominique, a first-year cheerleader, was saddened by the news of the season being canceled.

“It has been pretty hard. Personally, I went from being so busy and involved in sports, school and community service, to being a house hermit,” Dominique said.

“It is really hard watching youth, high school and even other colleges all getting face-to-face interaction and we get a computer screen,” Dominique said in regards to whether or not she thought Palomar College made the right choice.

Zach Monahan, 21, is a second-year football player at Palomar College who plays wide receiver. He was very upset with the spring season being canceled.

“This news hit like a truck because as a second-year player, I remained enrolled as a full time student. I had the assumption that the COVID year would be granted as an additional year of athletic eligibility,” Monahan said.

The football coaches were able to give Monahan and his teammates advice going forward.

“Keep our minds and bodies prepared for whatever the season is going to look like. They have been really good about making sure we understand that we have mental health support and various administrators here to help us through these troubling times,” Monahan said.

Addison Rose, a runner for the Track & Field team, said over email that she got the news about the spring sports season being canceled a couple of weeks ago.

“That was really disappointing, especially for the few of us who have been consistently putting in work,” she said. “I know for me personally, I am constantly on the lookout for road or trail races to open up so I can do that instead.”

When Rose was asked how the cancellation is going to impact her transferring abilities, she said, “As for transferability and recruitment, I am one of the only ones I know on my team that is transferring this fall. So far the shutdown hasn’t really been an issue for this.”

“It just makes it a little harder to gauge where I’m at for the coaches, since all my times are older,” she added. “I have just had to personally put in more work in reaching out to the coaches of the teams I’m interested in being recruited by.”

Erika Atienza, another runner for the Track & Field team, is in her first year at Palomar College.

“I was actually still in high school when the shutdown took place! It was a huge letdown because I didn’t get to race once my senior track season, but I’m a firm believer thing happen for a reason,” Atienza said over Instagram about her reaction to the season being canceled. “As for the Palomar team, we just continue to train and show up to practice each day.”